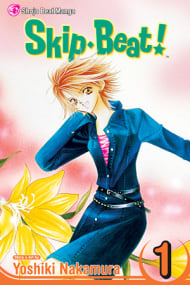 Kyoko moves to the big city with the prince of her dreams Shotaro; he wants to make it big in the entertainment business, so she works hard at many different jobs to support him as he achieves his dream. However, one day, Kyoko accidentally discovers the horrible truth: the love of her life thinks of her as a 'plain and boring woman!' Outraged, Kyoko swears revenge - she will make it even bigger than Shotaro in the entertainment world. The only question is, how will she fulfill her desire?

I started reading this mainly because I needed to balance out all of the drama and shounen mangas I read with some comedy, and this DEFINITELY did the trick!  Story: It begins as a revenge story and develops into so much more. Even though it still is about getting back at a guy, it also incorporates finding one's true identity after being dependent for so long. It discusses vulnerability and how pain, although no one likes it, is necessary for growth. It is heartwarming and also hilariously comedic. I cannot count how many times I have literally laughed out loud or had to take a moment to recollect myself while reading this. It may not be COMPLETELY realistic, but the emotions behind it are real enough to make a believer out of anyone.  Art: The artwork is really good for the most part. The flaws only really occur in the males of the serious; sometimes they are drawn disproportionally tall and broad. However, besides that the art is great, ESPECIALLY when Kyouko goes through her "transformations". The clothing and the facial expressions are drawn well and realy capture the essence of each role she takes.  Characters: So good!!! You will be rooting for the main character the entire way. She isn't perfect either. Most of this manga is about her finding a way to accept love back into her heart, however she is fiery, energetic, strong, and most importantly, the kind of heroine that someone can relate to. The supporting characters are well defined as well, each with their own set of personality quirks that make them fun and refreshing. There may sometimes be a lot of characters and it does sometimes get hard to keep track of, but they are all so fun that this doesn't become an issue. Overall: A great manga that is doing things right. It is fun and entertaining. It also does go into deeper topics without losing the levity that the story relies on. It is a great read for all times. Definitely one to read! 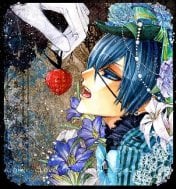 Skip Beat! Is a manga that I did not expect much from. The summary given did not give a very interesting inlook on the story, but once I began reading it, I couldn't stop. I'm on my fourth, (yes, fourth,) run of re-reading it, and the humor of it still makes me literally laugh and giggle at nearly every page of the adorable, quirky, hilarious spaz that Kyoko, the main character, brings into the story, as well as all the other characters. The characterization of every character in the story is amazing. Kyoko's character is so complex and yet relatable that she is quite unlike any character from an anime or manga that I've seen. She is so crazy, and wise and mature and naive all at the same time that it's hard to pinpoint exactly what she is, because she is in fact all of these things. Ren, the love interest, is at first cold and sarcastic towards her, which isn't rare at all to see in a manga. What's different with Ren is that he doesn't get caught up instantly in love with Kyoko, he battles with himself, and is his own character, rather than a generic sarcastic-bad-boy love interest. The characters in Skip Beat! (and there's a plethora of them) are all so wonderfully made that they make the story interesting when the romance in the story develops slowly. Unlike most, Skip Beat!'s man protagonist is not ultimately focused on love. I fact, she refuses to allow herself to be in love until about 120+ chapters in. Instead she focuses on her revenge of her childhood friend, Sho, and creating her career as an actress to achieve her revenge. The manga is so long, that you become attached to every character and when the romance does start, you are completely and 100% intrigued and hooked. The only bummer, is that the chapters are so slow to be released, that once you get to the newest release point, you have to wait agonizingly long to know what happens next. But it's worth it, and I HIGHLY suggest reading this manga!

Definetely one of the best manga I've read so far (and I've reada lot!!). To be honest when I started this I was really skeptical, I was expecting the usual shoujo with a weak female lead so I was really surprised to see it was actually the opposite. I think the greatest thing about this manga is not only the character development throughout the story but also all the small changes they experiment within the same narrative arc. Another good point are the facial expressions, very strong and comunicative. At first I was annoyed for the super-slow development of the romance but now I even appreciate it, it keeps the level of curiosity very high and never makes you bored.. maybe only a little bit frustrated. 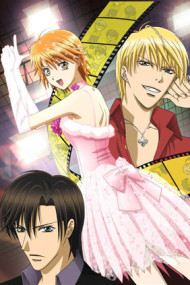