Skeleton Knight in Another World - Reviews 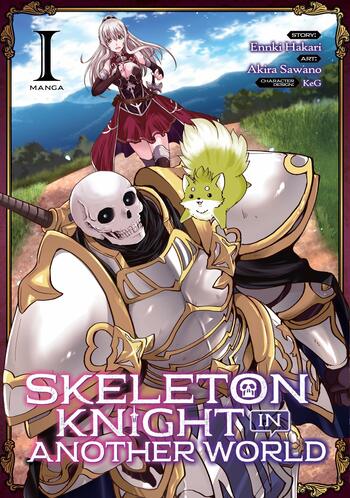 The story (light-novel) is written by an author as a practice piece for his future novels. As such, there are many parts that feel exaggerated or forced. overall the story's not bad and for those wondering it does have an ending. I personally feel that once you take into account it's one of the authors' first attempts at writing a story you'll enjoy it more for what it is. It's a simple 'stuck in a game that's become reality isekai', If you like manga/ LN/ WN such as overlord you'll probably enjoy this.

This manga likes the idea of conspiracies--of everything fitting together in one big narrative, one big plot. The problem is that it doesn't actually feel like everything fits cohesively together. It feels like patchwork. For example, the first few chapters have Arc go on some adventures. And later it's revealed that those seemingly unrelated problems he solved were actually related all along! Or another example: when the slave-trading conspiracy is just dropped and replaced with a warmongering conspiracy, tied together because some nobles are involved with both conspiracies. But honestly, it was probably a good idea to move on from the slave-trading conspiracy, since that was going downhill (chapters 13 and 14 were rushed and uninteresting and made me lose interest in the manga altogether for the next several chapters). Another problem with all this desire for schemes and plots is that I have a difficult time keeping track of which countries are which and what their relation to other countries is, as well as what rank and position certain nobles have. The most important one seems to be Yuriana, who's the princess of Roden and involved with a battle for succession with her brothers. She also heads the negotiation with the elves. Other than that, it just matters that there are signs of war brewing between various countries and the church may be involved as well.

As for Arc, he woke up in this world as his video game avatar, along with all the skills and equipment he had painstakingly gained in the video game. But now it's real and he's super strong. He also can't take off his knightly armor because he had chosen his avatar to be a skeleton (and that would scare people). First, he meets Ponta--a cute little fox-like spirit animal. And when he meets others like Danka, Arian, and Chiyome, they trust him because a spirit animal trusts him. Ponta basically acts as this world's version of a credit score--telling strangers at a glance that Arc is trustworthy. For the most part, I like Arian and the bit of romance happening between her and Arc.

As for the art, I adore the rounded edges to the narration boxes. The curves just soothe me and make me feel at ease. Other than that, I guess the characters are drawn pretty well and it's also good at having action happening in both the foreground and the background (like with Ponta or whatever), so it doesn't feel stiff.

Being afraid of every single spec of dust even tho you defeat monsters with ease starts to get annoying at a certain point.

very generic and very boring, the story doesnt have any progress...