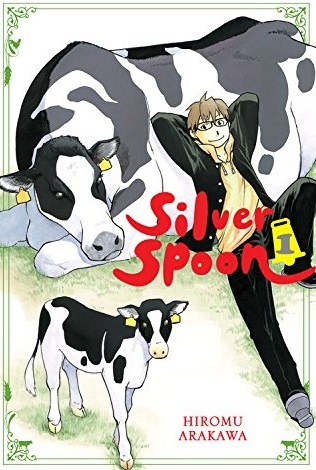 Silver Spoon is, in short, one of the best manga I have read in a very long time, maybe ever.

First off: what's it about? This series stars Yuugo Hachiken, a city boy who knows nothing about farming, and yet enrolls in Ooezo Agricultural High School. He does this because he burned out from breakneck studying during middle school and is hoping that at Ooezo Ag, it would be an easy ride to the top of the class. However, Hachiken soon encounters the shock of his life when encountered with lessons about agriculture, food science, animal husbandry, and related fields on top of typical high school subjects, not to mention the farm chores that force him to get up before the crack of dawn every day.

As the series goes on, the reader learns that Hachiken has also wanted to get away from his parents, particularly his intimidating and expectation-filled father, and has no idea what he wants to do with his life once he graduates high school. This, then, is the story of his journey throughout three years at Ooezo Ag, as he gradually confronts and works to solve these problems.

Helping, and sometimes hindering, Hachiken along the way is a large and colorful cast of supporting characters: classmates, teachers, parents, and others. Many of them seem to fit into a specific archetype at first-- for example, Tokiwa is the carefree goofball and Nishikawa is the otaku-- but they are much more interesting and well-rounded than that. It's difficult to pick out favorite characters in this series, but one that stood out to me early on was Tamako Inada (nicknamed "Egg", which is "tama" in Japanese). She is very plump, already unusual for a manga character, but comfortable with her weight; there's actually a minor, and quite tasteful, gag that involves it. She also comes from a family who runs a large-scale factory farm, and is a relentless aspiring businesswoman, which further bolstered the strong first impressison she left on me.

Besides Hachiken, two important characters are Aki Mikage and Ichirou Komaba, who also happen to be childhood friends. Mikage loves horses more than anything, but is a terrible student, and also happens to become Hachiken's crush. Komaba, on the other hand, is an ace baseball player who dreams of going to Koshien, Japan's most important high school baseball tournament. Thanks to Komaba, there are some exciting scenes that could've come straight from the best sports manga. There's much more to both Mikage and Komaba, but that would get into spoiler territory, so I'll leave things here.

The overall tone of the series is lighthearted, with plenty of bits of laugh-out-loud comedy, thanks to some exquisite pacing and very funny facial and bodily expressions. Tokiwa's antics, Mikage's self-described rival, and a certain relative of Hachiken's are a few ongoing sources of gags that I can think of, and there are many more. Silver Spoon also makes an effort to educate its readers about where their food comes from, with detailed sections on subjects ranging from slaughtering pigs to cheesemaking. Some of these and other informative passages can be rather dry at times, but are nonetheless worth reading. There are also several scenes involving cooking and eating, which, as with many of the best food manga, makes this series hard to read on an empty stomach. Given the heavy emphasis on dairy and meat (it should be noted that mangaka Hiromu Arakawa grew up on a dairy farm), Silver Spoon might be a hard read for vegetarians and animal lovers.

As a high school manga, there's nothing else quite like Silver Spoon, and it also succeeds as a romantic comedy. It is every bit as masterfully written and drawn as Arakawa-sensei's previous major work, Fullmetal Alchemist, albeit fairly different in subject matter and tone. If you love manga, and especially if you like comedies, high school and/or rural settings, and/or FMA, you owe it to yourself to read Silver Spoon.