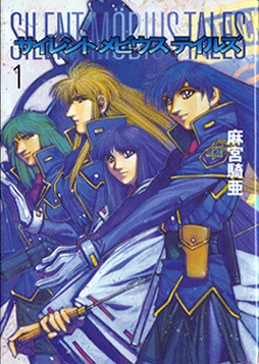 Recently, Japan has been under attack by the terrorist organization ALICE, led by a man known as Zero. The only hope lies with an anti-terrorist police force charged with taking down ALICE, led by a man named Kido and a high school girl named Kasumi whose assassin-like skills are matched by no other. However, there's a catch: she's an ex-ALICE member. Together, the two shoot and blast their way towards the enemy in an attempt to protect the country and rescue Kasumi's brainwashed ALICE comrades, but little do they know that Kasumi carries a dark and dangerous secret...

In a future, postwar Japan, poverty and crime have created a new breed of criminal. A new police division is formed with the resources and firepower to deal with the threat: the Hellhounds! To the government, they're heroic guardians. To the people, they're armed thugs. Now, a newcomer to the Hellhounds finds himself caught between the people he's sworn to serve... and the revolutionaries out to kill him!

Tokyo that has descended into a quagmire, the story follows Unit 8 of the 5th Special Public Security Section's 3rd Mobile Assault Division, popularly called "The Eighth," who don powered armor "Willwear" exoskeletons to counter the rise in crime. Assistant inspector Asami Kazari is assigned to The Eighth with the task of assessing the unit's status and reporting it to her superiors. But her true goal is to rehabilitate this sloppy, haphazard, justice-less group.

Mysterious objects from space have landed, embedding themselves within human beings around the world and granting them impossible powers according to their deepest wishes. Seventeen-year-old Utsugi Minoru's only wish is to be able to live apart from the world and events around him. But will he remain the same after experiencing his new powers--and new dangers?