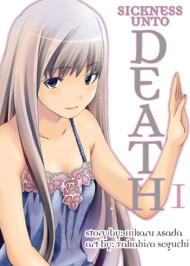 675 users are tracking this. Log in to see stats.

TL;DR - The premise was interesting, but the execution didn't quite live up to it...  ***Spoilers follow*** Story - 5/10 So... you start off reading this with kind of an idea of what to expect. He's a psychology major, so you can infer that there's going to be some component to this which will either try to mess with your head or try to make you think. This does end up happening, but the execution of it just ends up being lackluster... In order to really build up the premise that's actually used, you have to spend a lot, a lot of time building mystery around a character. You have to make them hard to understand, but easy to follow, leading the reader around on a wild goose chase. In the case of this manga, you don't get any of that. Rather than suffering from what she actually is suffering from, it seems more like random moments of PTSD mixed with just generally being a whiny child. The two characters fall in love too quickly... I never did enjoy stories like that. At the end of it all, you realize that there could have been a fantastic development here, but you leave with a disappointing taste in your mouth. This is especially true in the last 3 or so chapters. The very last chapter just leaves you thinking, "Well... ok." Finally, the biggest killer of this for me was the heavily tied-in theme of Kierkegaard's "The Sickness Unto Death." For those of you who don't know about it, the book is basically this guy's oozing of his own religious beliefs: since Christians believe that death is only a step along the way to eternal life, the true "Sickness Unto Despair" is the death if the spiritual self, namely, abandoning or revolting against God's plan for who you are supposed to be. First of all, I'm not religious, so the theme just doesn't resonate with me. Secondly, although the theme somewhat fits, it's more of a convenience than a plot device. There's a direct quote thrown straight into your face at the beginning. The main character borrows this book to read from another psychologist. There are a few more mentions here and there. But no significant tie-in. It was just a whole lot of meh. Art - 6/10 The artwork wasn't terrible but it wasn't exceptional either, slightly above middle. A few times in the manga, I felt like some aspect of the human body was being misproportioned or badly malformed (some scenes looking at a character from the side or diagonally from the back, as well as some slightly oddly shaped bottoms during sex scenes...). ...and if you're here for the sex scenes, look elsewhere. There are few, they are not graphic, and you can't even get excited because you don't really like or care about the characters that much. Characters - 5/10 Actually, this is only as high as it is because 1) the potential of the characters, and 2) some interesting developments with the main guy. Overall, all of the characters are pretty generic and boring, but what ups the score for me is the premise of the story (the main girl has something unique regarding her psychological state). I think there was a lot of potential here, and it gets me excited thinking about what more crazy stuff the author could have thrown in. But in the end, the character herself didn't really strike me, and nothing super interesting ever really happened. The main guy was just your typical do-gooder, easily-impressionable youth. Nothing special at all. But my score was bumped up because we actually witnessed this guy being human. ***SPOILER***At one point in the manga, he just completely loses his shit and turns into somewhat of a "monster" himself. I found that really interesting, and it was the first semblance of any of the characters being interesting, so I was briefly happy. Overall - 5.33/10 Meh. Just meh. In fact, so meh, that I can't even feel motivated to give more meaningful details in this review. Most of the time, I only ever write reviews for shows that I feel really strongly about. And for this manga, I really, really strongly just feel MEH

I highly recommend this short manga for any psychology lover It is so good and the pacing gets better in vol 2. Its two volumes only, So you can finish it in 1 hour if ur fast. I have read it in my local library and it was fantasticI reccomend reading the official translation, because the fan one is poorly doneAnd it ruins the whole experienceI tried to read the fan translation after the official and it felt like a totally different manga. I can't really say a lot about it because it's literally two volumes I think the synopsis is enough to give you an idea of it Although I would say the synopsis says too much So I think reading the tags should be enough