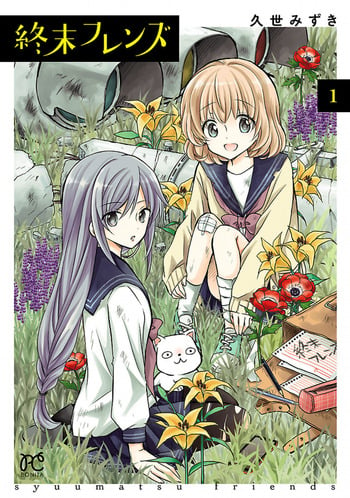 Airi is an average 12-year-old girl. She goes to school, hangs out with her friends, and loves being outdoors. The thing is, she can only be outside for 30 minutes a day. Welcome to Airi’s life. A catastrophic nuclear war reduced the world to a radioactive wasteland and forced her and other humans to live deep underground. But, this doesn’t bring Airi or her friends down. As they explore aboveground, they make shocking discoveries not taught in school. What do Airi and her friends unearth?

Earth after World War II. Rebuilding after the destruction has given rise to various vices. Disposers roam the cities cloaked in shadow and mystery. Kaede is a Disposer of SA rank, the highest level a disposer can reach. But he has to be in Central City, he must find the one who murdered his father...at any cost.

After the end, a young girl and her overprotective giant robot father figure travel the world salvaging supplies and avoiding the threats of the wasteland. A roadtrip with these two characters, the eager scavenger and her clumsy- but loving- mecha pal.

Goodbye Eden is a story of youth set in a post-apocalyptic Japan. While downing the "medicine," the government provided them with the purpose of dimming their fear, middle school students are armed with weapons to fight back against the "enemies," that assail them. Among them is a girl named Chikori, a normal girl who wishes to fall in love. However, with the world as it is, normality is difficult to uphold.

In a post-apocalyptic world, a girl fears the uncertainty of moving forward.

Today, there’ll be discoveries and encounters again. For the girls marching forward in a world in its afterlife, there are still various things to experience: The remains of an extinct civilization, other living things, as well as lessons taught by the ruins.. there is still a lot to be seen in the world. That’s why... living is still fun!

Armageddon. The powerful weapon "Messiah" has ended the long war, leaving behind a barren wasteland. A boy wanders west, seeking the paradise that lies at the edge of the world. The man who created the weapon runs from those who would use him. Scattered by the winds of destruction, they meet, part ways, and then meet once again.