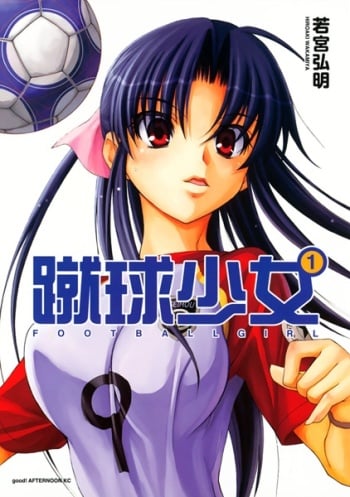 There might be some minor differences between Ro-Kyu-Bu! and Shuukyuu Shoujo (like, one has some intense ecchi while the other has lolis instead or one is about soccer, while the other is about basketball etc.), but the plot is extremely similar. In both series a talented male lead gets mixed up with an all-female (or mostly female) sports club. Most of the girls are not even trained in that sport (while the guy excels at it), yet they somehow manage to take on opposing teams. The girls being underestimated for being girls is also a common theme in those two series. And last but not least, those gals are a handful to handle. I can't guarantee you'll like one if you liked the other (neither of those series is great), but the plot is quite similar, so...

Little Rui having lost her mother is sent by her father to be taken care of by a girl named Honoko, who looks almost identical to her own mother. But it's not just her face that has grabbed Rui's attraction to Honoko... it's also the passion for soccer! Promising to become pro and play alongside her adopted sister Honoko, 13yr old blue-eyed Rui would let nothing stop her!

At school, Kamazaki Yuu feels as though there is a circle drawn around her, a line that no one will cross. A part of it is because her face looks mean, and another part of it is because she's rather socially awkward, but the largest part of it all is that she has earned a reputation for being really bad-tempered and violent to the people around her. This all changes in her second year of high school. The cute, friendly, and popular Kume Asami one day inexplicably crosses that invisible line and decides to be her friend. Kume introduces "Kama-chan" to friendship and to the 5-man futsal club that meets on the school roof. As Kama cautiously enters Kume's club, she may find herself able to grow past the bad expectations people have of her, and enter into a new, happier, high-school life.

The story centers on high school boys who mistakenly hope to be popular after joining club activities. Though they don't have real interest, they carelessly join a sports-oriented club at school.

Mizuno Kaori attends an all-girls high school and likes to spend time with her friends after class playing soccer. They'd like to create a club, but they're one member short of creating a team and people think it's foolish for girls to play soccer. Studying at the same high school, Umezawa Hikari is very popular among the boys but doesn't talk much. What most people don't know is that she plays soccer pretty well and dreams of becoming a national player competing in the World Cup. She then joins Kaori's group with plans to challenge a boy's soccer team from another high school. If they can defeat the boy's team, then they can let people know that they really mean business and this will also serve as a small step towards her dream.