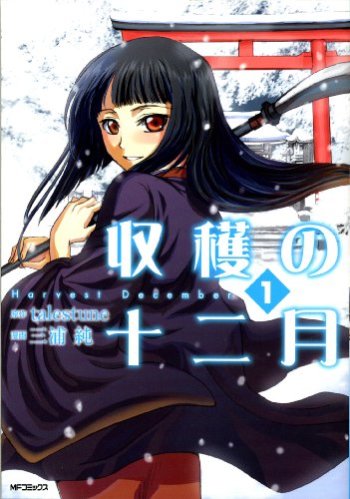 Makoto has been in love with Kotonoha, a beautiful girl who rides the same train as he, for some time now. Luckily, his classmate Sekai’s nosy personality ensures him an introduction to his crush, and soon the two begin to date. However, Sekai herself also has feelings for Makoto. Will Kotohona and Makoto’s relationship survive in the face of hardships and trials?

Mystery and intrigue, crime and punishment, uncovering the truth—all in a day’s work for the ace defense attorney Phoenix Wright and his beautiful assistant Maya Fey.  Based on the hit game series, Ace Attorney brings new adventures to the games’ colorful cast.  Can Nick successfully swing the gavel of  justice or will he be crushed by the weight of incriminating evidence?

Rewrite is set in the fictional city Kazamatsuri where treeplanting and afforestation have caused the city to become overgrown with trees and flowers in much the same way that other cities are filled by buildings. However, while most of the city appears to be rural, there are many traditional city elements as well. While set in a modern setting, the city also gives off a strange sense of nostalgia. The basis of the story is set in a high school setting.

Shishikura Shigure is an ordinary high-school student. He tends to be pretty oblivious to most of his actual surroundings, particularly at school.  Since his parents have gone overseas for work, his childhood friend Koyomi has taken charge of caring for him.  One Wednesday, one of her friends is reported missing, and she seems overly concerned. She explains to him that one month ago, a student at their school threw herself in front of a train.  Every Wednesday since then, a girl at their school has killed herself. She warns him not to get involved, but he decides to look for Koyomi's friend.  He ends up at the scene of the crime, where he sees a mysterious girl who claims she can peek into people's memories.  He learns later that she is the student council president. Why was she so cavalier about her classmate's death? Could she be involved, and will he be able to stop this string of supposed suicides?

Aikawa Wataru's father is being transferred overseas. Seeing this as a perfect opportunity, Wataru decides to stay behind in Japan and live on his own. Even though he's a new transfer student, his teacher convinces him to become a Library Representative. A fellow Library Rep tells him they’re missing a member and asks Wataru to find her. Not knowing how she looks like, he wanders the school trying to find her only to notice two girls gossiping about her negatively. It turns out the person he's looking for isn't well liked, because of her bad personality.Her name is Kobayakawa Rinko, but what's the source of her bad attitude?

Hirono Hiro is a high-school student, and secretly a shoujo mangaka, to all but his childhood friend and kouhai, Kei Shindo. One cold Christmas after meeting a mysterious woman in church, a strange girl steals his bike. Running after her, he finds her collapsed on the street. Learning her name is Miyamura Miyako, and that her bag was stolen by a man on a motorbike, Hirono finds himself spending time with Miyako, much to the dismay of Kei...

Only one name strikes fear into the hearts of evildoers everywhere: Phoenix Wright, ace attorney. Join Phoenix Wright and his adorable assistant Maya–plus Miles Edgeworth, Detective Gumshoe, Franziska von Karma, and others–as they investigate twenty intriguing cases. And find out why Phoenix Wright has devoted his life to fighting injustice!

In the story, for generations the men of the Susuhara family have, upon reaching a certain age, left home and gone their own way, living alone with no one to depend on until they are acknowledged. The protagonist is a high school student who has left home and is comfortable at his new school. But there's a strange girl named Toe Kurokami. She carries what appears to be Japanese doll, and he's sure its hair grows and it whispers things. Meeting her might be his destiny.