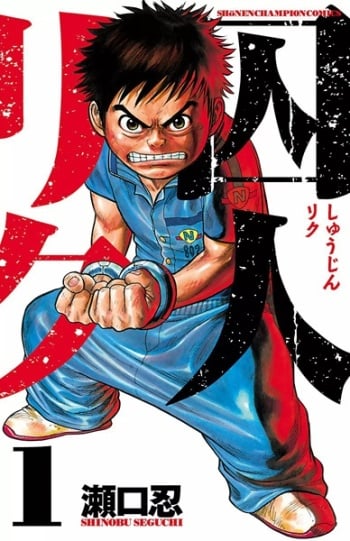 The story revolves around Kudo Gai, a mischievous 13 year old all alone in the world. He despises his classmates who live by their free will, although supported by parents, but taking it for granted. Gai soon finds out he is contradicting himself for he is being raised at an orphanage as well,and makes an attempt for independence. His actions lands him in trouble, where he is framed for murder and sent to a place in an unknown location called the 'human institute'.

Both of those stories take place in a prison setting. The two main characters are young boys falsely accused of murder who end up in prison, both of them fight and try to prove their innocence.

In a death match where prisoners will be set free after 1000 wins, Elio who bears the sin of killing his brother is let out into the outside world after three years.

Gaia, a mysterious man with the talent to escape from most bonds is sent to a top security prison, only to meet a police investigator investigating this corrupt prison and then trying to escape...

Nergal has been accused and convicted of heinous crimes involving magic. As punishment, he was sealed and sent away to prison to await death for forty days. The truth is though, he really is innocent! And, even though the guard Sunny befriended him...the boy's a total ditz! How will Nergal survive? At this rate, death may be more appealing than dealing with Sunny and the other prisoners and guards...

Set in and around the maximum-security Green Dolphin Street prison in Florida, surrounded by palm trees, swamps, and man-eating alligators, this storyline stars Jolyne Kujo (Stand: Stone Free), the daughter of Jotaro Kujo. After being falsely accused of a hit-and-run automobile accident, she is sentenced to 15 years in jail, a plot which may be orchestrated by some dark conspiracy, some unknown enemy.

Yoshiaki Maeda has been falsely accused and detained, along with delinquents from all over the Kanto region, in the juvenile correctional facility, Shouran Institute. Yoshiaki is as typical as a boy can get, so when he finds himself living in this violence-ridden prison, he can't think of anything worse. His cellmates, Iwakura, Yamanoi, and Yoshioka, are a cunning crew and soon Yoshiaki finds himself pulled into a feud going on in the prison. Then suddenly, a prison van crashes into the facility and what shambles out of the wreckage are flesh-eating zombies … and so the curtain is raised on this bone-chilling story of panic and horror…

In a fictional world that believes in reincarnation of the soul. If someone accomplished great things in their previous life, the society expects that person to also be very successful in their current life. On the other hand, if one commits a great sin and is punished with a large prison sentence that far exceeds the life expectancy of that individual, he is forced to continue serving that sentence in his next life. This is a story of Haro Ahinsa and his reincarnations, that have been sentenced to 339 years of penal servitude for the his sin.