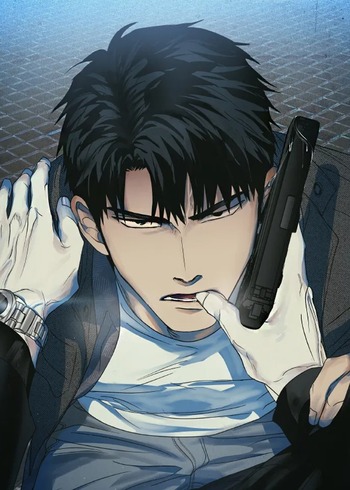 Jin is the most perfectly beautiful man Matthew’s ever seen. He’s also a high-ranking and violent criminal full of frustrated ambitions and equally frustrated appetites. But Matthew, a sculpture student prodigy, can only see the beauty—not the darkness. One way or another, Matthew will pay the price for his muse, with his body... or with something far more costly.

The mood in the art feels so similar somehow, and both include gangs and other things involved. both were also amazing reads i have no regrets

Trap City, a crime city in which the first, second, and third thing you must beware of is people. Noah Humphrey stole away the boss' money and ran away with it amidst an inconspicuous war between the two greatest groups in the city. Will he live as a toy for the boss Kahliya, or as a bait for the boss Rex, leaders of the rivaling groups? A love story blooms during a critical situation in which you have to do anything in order to survive!

Omega Harim attacks a random stranger for money in the midst of his heat cycle. But the man he tries to attack is an Alpha and leader of a large organization. Believing that Harim was sent to kill him, the Alpha throws some heat cycle sedatives at him and warns him to not cause any more trouble. But then Harim foolishly steals the man's wallet and gets caught, after which he is forced to become the Alpha's maid…

Will it hurt or will it feel good? The Kuroda clans and Kirigaya clans are rival yakuza gangs that control parts of the Kanto region. A certain incident leads to a volatile situation between the two groups. Tomoya Nishida, the second in command of the Kirigaya clan, who wants to avoid the conflict at all costs, makes a proposition to Fuyushi Kuroda. The price is his own body. In order to keep his mouth shut, Nishida offers his body to Fuyushi as if to seduce him, but... In the world of men with moral code, tactics and pleasure intersect!

Jae-in, a key figure in the illegal gang and the big brother, disappears after a decisive battle with the Yuksa. Four years later, Yu Nan, who closely followed Jae-in, reunites with his hyung who had dreamed of it... The relationship between the hyung who wears a hypermarket apron and the dongsaeng which doesn't seem so serious?! Jae-in, who buried his past and walks the path of child-rearing, Yu Nan, who had only chased his heart and obsession, and the comedy Ronna, a cute little girl who has an unusual language ability.

Mongryong is having what we’ll call... a tough time. His sister’s having an affair with a married man, and the guy’s wife is the older sister of a major mob boss. To make matters worse, Mongryong's sister’s boyfriend’s wife’s brother decides to take him hostage as bait to lure the lovers out of hiding. Will the madness never end?! ...Still, maybe—JUST maybe—Mongryong can convince his captor to go easy on him. Just not TOO easy. After all, there's nothing wrong with playing a little rough either.

Miha has always felt like an outsider, even within his own family. Sohwa takes full advantage of that, forcing him to do his biddings. However, an incident takes place that helps Miha and Sohwa to reflect and figure out what they are feeling for each other.

The Words In Your Snare

A recluse by choice, young cafe owner, Lee Jooin, has fled the hustle and bustle of Seoul to live in the countryside in peace. His peculiar ability to read people’s thoughts as text left him unable to trust or face the words left behind in his broken home. But, his peaceful new life is suddenly interrupted when a sack of drugs winds up on his doorstep. With that, he finds himself tangled up with an unusual new customer, the right-hand man to the infamous Sa Gang, Mookya. Besides Mookya’s adorable quirks, there’s one thing about him that Jooin can’t ignore; the fact that he can’t see Mookya’s thoughts. As both of these mysterious men become more and more infatuated with each other, their hidden pasts begin to unravel and they find their social circles overlap more than they realized. But, how long before they are torn apart by the words they never wanted the other to hear?

Yakuza in Rut Young Man for Dinner: And the One on the Chopping Board Is... Me!?

"Come on, just cum." ... I'm definitely on that side of the fence now. By which I mean a yakuza group has taken me in... One day, I was suddenly caught up in a some horrible business! Stripped naked and stuffed inside the trunk of a car, I was about to be abducted when a rough looking gangster saved me!! Since I was hungry, the successor to this yakuza group made me a super delicious rice omelette... And before I knew it, he was looking at me as if I were the food! Licking my nipples, and tasting me down there. Hey, wait a second!! A gangster who loves cooking and a boy who looks ready to be served. And the one on the chopping board is... me!?

"Ever since I saw your firm back, I yearned for me." that's the last thing my dying father underling said, before violating me!