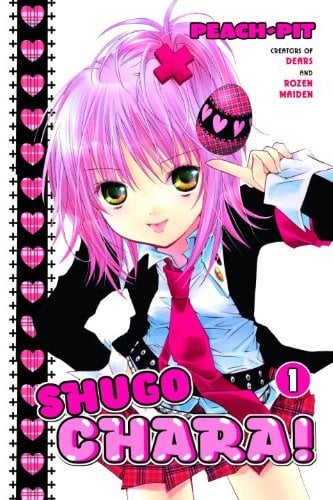 If anybody is deciding whether to read the manga or watch the anime first: I strongly recommend the manga. The anime made some changes that I don't think benefit the story, added boring transformation sequences, and has long-ass boring fillers.

Now, that that's off my chest... My favourite magical girl. :D Why? The protagonist, Amu is actually cute; not the "dojikko" type who just falls off every stair and is adorable by making small mistakes and such. She acts strong, and everybody admires her for being "cool and spicy"; but she can't be stereotyped into the "best of everything" type either, because while she puts up a front, she also makes mistakes and has insecurities.

But enough of Amu. I'd be lying if I said she is the reason for my love for the series. Oh, no. It's the other main character; the male one - Tsukiyomi Ikuto.

He can be categorized as a ridiculously handsome flirt with a dark past and an affinity to music. What's more, when he changes, he has cat ears and a tail. Man, the mangakas of Shugo Chara! sure know what girls like, don't they? :D He's one of my favourite manga/anime characters. While usually I enjoy fresh, original characters, a dream guy is also satisfactory from time to time ;) I really enjoy Hoshina Utau's character. She's also a strong girl in love, who know what she wants and stops at nothing until she gets it. She's beautiful, sings like an angel, but not lacking negative qualities, either, so, once again, she's an interesting character.

Thankfully, the story turned out good, Ikuto wasn't some pathetic badguy (or goodguy), and the shugo charas themselves are adorable. Nobody is aiming to destroy or take over the world; everybody wants to achieve their dreams.

My only problem with this story was something that was added because of the younger audience: all the bad guys turn into good guys. Seriously, not one of them dies or goes to jail or something. That is just weird. Character-wise I gave it 9 out of 10 because Yaya and Tadase annoy me a great deal. Tadase is too bishojo-y, he's not a prince, he's a GIRL!! But I like how his character develops, I like it that he falls in love and protects his precious person and fights for her like a man. Yaya, on the other hand... She's absolutely selfish, acts like a spoiled kid, and that kind of attitude I can't stand from anyone older than 7. You have to know when to act responsibly, to make your friends' lives easier.

All in all, if you like cute anime for younger girls, this will be a good read for you. It was the first of its genre that I have read from beginning to end, and it was an experience that made me realize that not everything I like has to be made for people my age.

I haven't seen the Shugo Chara! anime in well over a decade and was starting to miss the show. I decided to try the manga and ended up liking it a lot. As crazy as it sounds though I enjoyed the anime more. This might be because I'm way older now and I'm not really a part of the target age group anymore. Nostalgia has probably made me biased too. Anyways on to the review.

Shugo Chara! is a magical girl story that takes the whole trope and does something different. The main character Amu struggles with being herself and puts on a different personality for everyone else around her. This is a main topic of the story and many other characters also struggle with finding themselves and living out there dreams. From those struggles result little chibi characters who personify their want to be selves/ dreams. All of the little chibi characters are entertaining and reminded me of the chibi characters from Yumeiro Pâtissière.

The story doesn't drag on unlike the anime or feature a monster of the week trope. It also has a different/better ending when compared to the anime. Most of it was the same though. I'd say it's worth reading if you haven't seen the anime in awhile or wanted more romance. :D