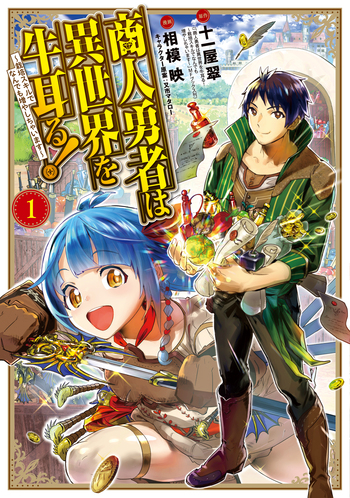 I was summoned to an unknown world to defeat the Demon King, but my level seems to be very low when compared to the others that were summoned with me... Wait a minute, my occupation is "God?"

Hiroshi Yamada (42 years old), a dull salaryman, was chosen to be a brave warrior which should have been limited to young people. Then he was suddenly sent to another world full of monsters and as a promised gift of his summoning, Hiroshi was given three strong skills by God: [One-shot K.O.], [All Magic Creation], and the ultimate physical strengthening ability [Transcendence]. And so Hiroshi must defeat the monsters one after another by making full use of the given skills. However, he's extremely clumsy and can’t control his skills, so they always go out of control. Because of that, Hiroshi meets a cute female fairy and a muscular old warrior to go on his adventures with him. See what happens to Hiroshi as he experiences a different world fighting against monsters and sometimes annoying the townspeople with outrageous acts.

Asakura Saku, a young physician, received a revelation from god and was summoned into another world in his 15-years old form with a growth cheat that dramatically raises his stats when he levels up. However, there was nothing and nobody around where he was summoned, which made him unsure about what he should do. After a while, he spotted the tracks of a horse-drawn carriage and decided to just follow after it… In his journey, he befriended an owl monster, fought off an encounter with a rampaging dragon, and saved a group of girls being attacked by goblins before he finally reached a town. There, he came to a realization. That he was an existence far from the common sense of this world—

Itonami Noria was summoned into another world. However, he did not possess any “skills” which any inhabitant of the other world all held. Evaluated as useless, he was casted out to the uninhabited land. Although appearing to lack any skills at first glance, Norio actually had the special gift “Ultimate Supporter”. Seeking a sense of adventure in another world, Itonami Noria christened himself as Kidan, and decides to cultivate the land. With his ability, “Ultimate Supporter”, he is able to make use to anything in his hand to maximum efficiency, gradually cultivating the land for use. One day, while fishing at the seaside, he caught a beautiful mermaid! She names herself as Pratty, and announces that she shall become his wife for catching her—!?

As he was being transferred to a different world with his classmates, Fubuki Amasaka was pushed out of the teleportation circle by his class bully, Yushin. When he woke up, he was alone and deep in a forest.However God, who had saw the entire thing and already warned them to stay in the circle, took Yushi's cheat skill away and gave it to Fubuki as punishment. Can Fubuki, who got two divine blessings, live in a different world safely?

Possibly the Greatest Alchemist of All Time

Not even a hero, Takumi Iruma gets accidentally mixed in with a group of heroes chosen to be summoned to another world. As compensation for the mix-up, a goddess offers him the right to choose any skill he wishes for! Hoping for a peaceful and quiet life that has nothing to do with fighting or going into battle, he chooses a seemingly boring creation skill. However, it turns out "alchemy" is the most powerful skill that allows him to create everything from a holy sword to flying ships! This cheat skill he unexpectedly acquired turns him into a wealthy merchant and makes him undefeatable in battles! A heartwarming adventure story about (possibly) the most powerful alchemist in another world!

Campfire Cooking in Another World with My Absurd Skill

Mukouda Tsuyoshi was nothing special in modern Japan, so when he was summoned to a world of swordplay and sorcery, he thought he was ready for the adventure of a lifetime. Too bad the kingdom that summoned him only got him by mistake! Not only was he not one of the three summoned heroes, but his stats were laughable compared to theirs. On top of that, there's something really sketchy about this kingdom... "Ah, these people are the kind to try and use the Hero," he realized, and immediately left to make his own way in this other world. The only thing Mukouda can rely on is his unique skill: the "Online Supermarket," a skill that allows him to buy modern goods in a fantasy world. It's useless for combat, but if he plays his cards right, he could lead a comfortable life, maybe? At least, that's what Mukouda thinks, but it turns out modern food bought with this skill has some absurd effects!

When Kirishima Ran and his classmates were transported to another world they each received an ability. However the ability he received, [Sexual Lunatic], has caused nothing but trouble for him. His ability allows him to make any girl he comes in contact with his slave. Because of his ability, his classmates have shunned him and forced him to separate from them. With the fires of revenge burning inside his heart, Kirishima decides to overtake the class from the shadows. One by one he turns his classmates into slaves and fill his desires.