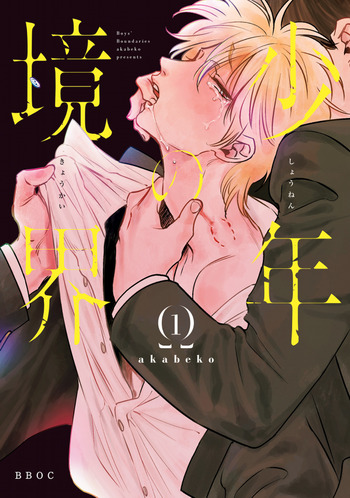 This is my favourite Omegaverse yet.

Summary: Shy Kaoru follows adventurous Yuka throughout their childhood. Upon entering middle school, Yuka distances himself from his plain childhood friend. Gender examination occurs and Yuka learns that he is an Omega. Discovering spacial awareness, Yuka avoids arrogant Alpha friend, Taiga. But, Yuka gets trapped by him, however, Kaoru comes to the rescue, then Yuka learns Kaoru is also an Alpha. With rapey dialogue from Yuka's friends, Kaoru "protects" Yuka by raping him and biting the nape of his neck- bonding the two forever. Taiga loses interests and after seeing another Omega in the school, tells his friends that Yuka was special to him, but he'll wait for his fated partner.

Years later, Taiga is working a prestigious job and is still single but occasionally has fruitless sex with cute Omega waiter, Rin. One day, the two "couples" cross paths and it becomes clear... Rin and Kaoru belong together, (hinting that Kaoru was only aroused before the rape due to the hormonal influence of Yuka's shitty horny friends.) Rin obsesses over him and goes into heat. He confesses his passionate and undying love towards Kaoru to Yuka in hopes of breaking their bond. Then, while hoping to mate with Kaoru, Rin ends up overdosing on suppressant. As Taiga is tentatively caring for Rin, he finally catches feelings and asks Rin out. And Yuka, who has always seen Kaoru as a childhood friend, begins to consider him as his romantic partner. Rin and Taiga hint at making a baby at the end.

Thoughts: You think the story is predictable, but it's not. The trope of nothing breaking a fated pair is like water in a desert, vanished. The cliché side of me didn't want to see couples with such similar personalities (Kaoru + Yuka being innocent and Rin + Taiga being cynical.) Until now, I was unaware that fated pairs could choose to not be together so it's heartwarming to see the perfect happy ending.

No review yet but let me tell you this is the best yaoi omegaverse I ever read. It has love, fate, smut and drama. What are you waiting? read it, cried  a lot and then came here to rate it 5 stars.

The story line was good, and the struggles were realistic. Even most of the characters were alright, but I had to rate it low for one character: Rin.

There is no character in all of manga history that I disliked more than him. I get what the author was trying to do; s/he was trying to garner the sympathy for someone in an unfortunate situation of fate, caught unawares by circumstance. But god if I didn't cringe every time he chased after SOMEONE ELSE'S BONDED MATE. They weren't just dating. They weren't casual. They've been LIFE PARTNERS and they were bonded despite the adversity they faced, and here comes Rin going, "oh look at my heart beating extra fast and me feeling tingly in my unmentionables. Let me just RUIN a happy union because I'm a completely selfish fuck and instead of finding my own happiness, let me just take away someone else's." Nah. Miss me with that shit.

And if Rin wasn't so present in the entire story, maybe I would have rated it higher, but his simpering and endless crying was practically on ever page of the chapters following the bonding of the main two characters. I just couldn't. I completely skipped the last chapter of him finding actual happiness the way everyone else should have: in a healthy reasonable way.

Kudos to the author on the plot and the effort and the art. Everything else was well done.

I can't even start to explain how good thing manga was. It is so emotional and the story is really interesting. The characters are loveable and also the storyline is easy to follow. I wouls definatley recomnd this to anybody who wants to read an omegaverse story.

The plot is not some cliche, omega immediatley falls in love with alpha story, it is quite different from that. Warning it might have some triggers, so if you are not good with mental abuse or just any type of abuse the I don't think you should read it. Anyway besides frrom that I really loved this story.