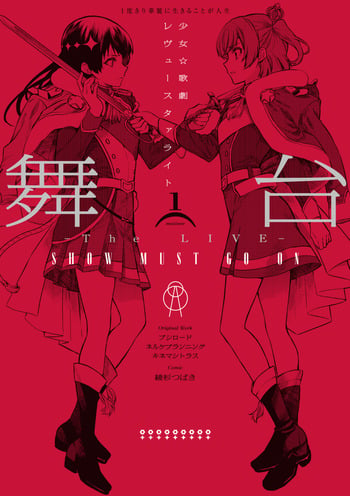 If you're looking for manga similar to Shoujo Kageki Revue Starlight: The Live - Show Must Go On, you might like these titles.

Kasumi Toyama has always been captivated by the "beat of the stars". Since then, she’s been searching for something… a spark that’ll excite and thrill her! Following a trail of star-shaped stickers, she soon stumbles upon a Random Star guitar at her school mate’s house! Could this mark the start of something amazing?

Konatsu Miyamoto was rejected to sing with the other members of her chorus club by the teacher because she was missing "something special." Being her last year in high school, she felt like doing something crazy: She quit. In the place of her former club, Konatsu comes up with the idea to make a new chorus club, inviting the people around her to join. With dreams in each of the member's hearts, they live out their high school lives.

I’ll rule the world with music—with that dream in his heart, young man Shinno was travelling to Tokyo when he suddenly awoke 13 years in the future. Experience the story of a “second first love” connecting the past and the present in another viewpoint.

Takurou Hibinuma, a third-year in high school. He is a boy who gets bullied, and has no talent in studying or sports, but the only thing he can call his own is "rock." He experiences many things through music, and aims to become a rock star

Hoshitani Yuta, Nayuki Toru, Tsukigami Kaito, Tengenji Kakeru, and Kuga Shu struggle to enter the musical department of Ayanagi Academy, a school focusing on music. They want to be accepted to the Star Frame Class, which is directly taught by the members of the Kao Council, the most talented students from the musical department who stand at the top within the academy. Luckily, they are spotted by Otori Itsuki, one of Kao Council members who puts them on his Star Team.

Release the Spyce: Naisho no Mission

The series is about a girl named Momo who attends high school at the city of Sorasaki. However, she is secretly a member of Tsukikage, an intelligence agency that protects people. As a new member of the agency, she works alongside her colleagues including her senior Yuki and friends. Together, they work to establish peace in the city.