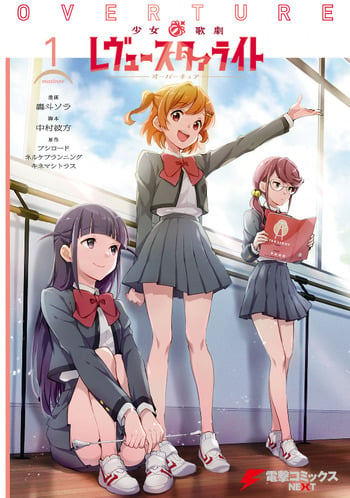 If you're looking for anime similar to Shoujo Kageki Revue Starlight Overture, you might like these titles.

Ichigo Hoshimiya is an average first-year middle school student, but after her best friend Aoi encourages her to enter Starlight Academy, a famous idol-training school, Ichigo's whole life changes. She meets various rivals, becomes proficient in abilities that are integral to idols, and uses Aikatsu! cards while challenging herself with an array of auditions.

With the rise of the new idol school, "Dream Academy", Starlight Academy has been placed in a predicament. With large rookie idol with perfect pitch "Seira Otoshiro", and producer-in-training Kii Saegusa, Starlight Academy will start facing new rivals which appear one after another, multiplied by the rivalry to take the seat of top idol. The girls driven into Idol Activities with overlap, encounter, and interact with new rivals. Ichigo and the others' Idol Activities will continue to go on.

The three members of Luminous started their tour in Hokkaido, where they met two girls who love singing and dancing: Nono Ouji and Lisa Shirakaba.

Yume Nijino aims to become a top idol, and she enrolls in the Yotsusei Gakuen (Four Stars Academy). This academy has a special group called the S4, who are the top four active idols in the school. Yume and the other first-year students aim to become a part of the S4.

Second season of Aikatsu Stars! The new story will feature a rival school to Yotsuboshi Gakuen named Venus Ark. The school is on-board a cruise ship, and the story's two new characters are students at the school.

Aine Yuuki is good at making friends, and is enrolled in Star Harmony Academy's general education track. She befriends Mio Minato, the school's top idol, and becomes an idol herself.