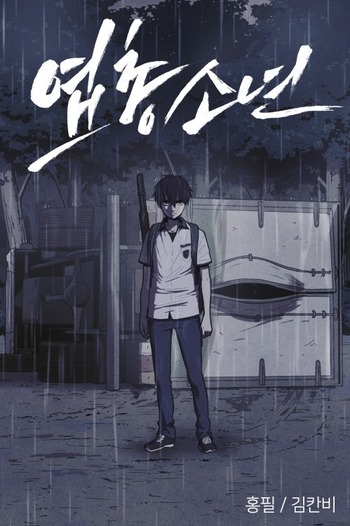 Prepare to swallow your screams.

All Of Us Are Dead

Life at Hyosan High School is nothing special… until the students realize they’re in ground zero of a deadly virus that turns its victims into flesh-eating monsters. As the virus tears through their schoolmates in a matter of hours, they realize they have nowhere to run. Trapped in their high school with zombified versions of their friends and teachers, they must find a way to fight -- and escape with their lives.

There's something strange, in the neighborhood. Who you gonna call? Uhm. Some strange cute hypnotist girl. And you have no clue who she is, and you didn't call her.

Every woman has inside her a pain--and a power. It is the darkness that resides in the deepest recesses of her worst memories. It is the drunken father that stabbed through her mother’s locked door. It is coming of age after her parents are viciously murdered. It is trying to protect a little girl who has already lived through nightmares. It is the gap: a collection of three progressive horror stories exploring gender, trauma, and what it means to be a woman.

The second season of Dr. Brain.

Since his youth, Lee Sewon has been fascinated with neuroscience, but now he’s taken it to the next level. He’s developed a method to hack directly into the brain and extract memories from the bodies of the deceased. When a private detective approaches Sewon about using his discovery to solve crimes, the young scientist sees an opportunity to test his limits. But what he doesn’t see is the danger ahead. As Sewon becomes embroiled in investigations, he realizes just how dangerous the mind can be.

Mr. Kim has lived alone ever since his wife mysteriously fell off a cliff. Her body was never found, and Mr. Kim believes that she is still out there. On a dark, pouring day, Mr. Kim revisits the site of her presumed death. On his search for her, he comes across an old man that creates scarecrows for "souls"...