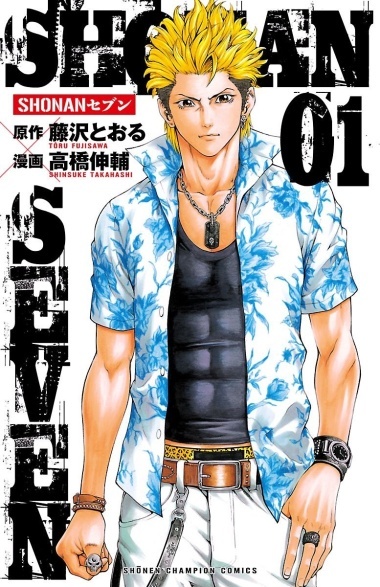 What would happen if you took a normal Japanese kid, flew him to Nevada, and then raised him on stories of feudal Japan? "I'm Doshiro" would happen. Now Doshiro is back in Japan and is facing the difference between what he's been told all his life and what his own eyes and ears are telling him.

Majima Rei is a practitioner of a martial art born from the battles in the Sengoku era, the Jinnai style jujutsu. During middle school he was a delinquent but, when he became a highschool student, he swears that in order to surpass the one said to be the strongest practitioner of the Jinnai style in history, the 8th head Jounouchi Masashi, he will become the strongest martial artist in the world. For that purpose, he battles against various types of martial arts and fighters.

The Adventures of the most dangerous Yazuka in high school, 15 years old Hanayama Kaoru!! This is a spin-off of the Baki series, showing the school years of the character Hanayama.

Kyousuke wants to be a cop. Because of that, he always tries to do the right thing and help others out. Well, while saving a girl from some bullies, they end up liking each other. Not to soon after, she needs saving again, and he ends up with woman's panties over his head, giving him super strength (pumped with horniness.) Not your normal super hero.

The main character is a delinquent feared in the whole region. He tried to start a new peaceful life full of love instead of blood but his past immediately catches up to him and reveals his true identity to everyone in the class. He meets a girl in trouble and decides to revert to his old self just to save her.... except she doesn't really need saving, beats him up and calls him weak!. He fell in love with this "flower that blooms in the battlefield" and decided to try to join the karate club (she's the captain) just to get close to her... but things aren't that easy....

This total loser, Tatsuhito, causes the legendary gang leader of the Grand Cross, Shou, to be hospitalized. He must take his place for the duration of time it takes for Shou to recover or else the Grand Cross would fall into chaos.

At Jinpu mountain, Chinmi Tao Ryuen is a student at the Korin temple. Every one at the temple sees him as the weakest, even the younger students don't show any respect for him and make fun of him as soon as they get the chance. But when he suddenly is in the Bout challange (this Bout of the champions is intended to choose the best student to receive a special lesson later on) and the other challanger is the powerful Kuen.