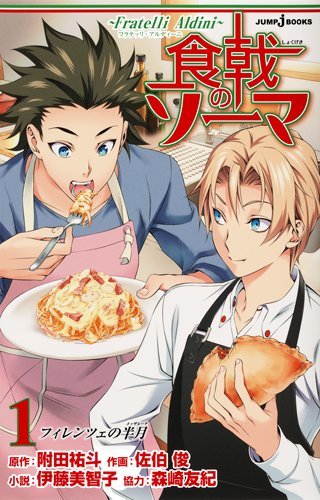 If you're looking for anime similar to Shokugeki no Souma: Fratelli Aldini (Light Novel), you might like these titles.

In the frigid north of Hokkaido, Totsuki’s first-year students face their greatest challenge yet—the advancement exams! Dean Azami sees Souma and the gang as resisters of his administration, so he hits them with everything he’s got, fair or not. Will the kids find a way to triumph over his shady tactics and advance to their second year, or will Azami freeze them in their tracks?!

Yukihira Soma was sharpening his cooking skills while working at his family's restaurant, Yukihira Diner and entered the super-elite cooking school, Totsuki Teahouse Culinary Academy. While at the school, Soma encountered various other chefs and continued to grow, but things changed drastically as soon as Nakiri Azami took over as the school's new director. He establishes Central, and the students become unable to cook freely anymore. Soma and his friends decide to fight back against how Central is handling things, which turns them into rebels.

The official music video for the Vocaloid song Hungry Nicole, by the producer Niru Kajitsu

Children can learn to cook with the heroine Main as she demonstrates various dishes in the anime half of the program.