Alt title: Blood of the Generals 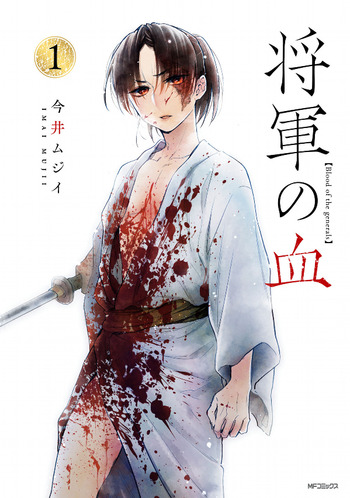 A feudal tale. Because of his status as an illegitimate child, Nobuhira is forced to join a temple. Not wanting to become a monk, at age 15, he flees Kyoto to go to Edo with the help of his elder sister Takako, who would later become the wife to the shogun Iemitsu. Iemitsu then gives Nobuhira a house and land of his own. However, even though Nobuhira later marries a princess, he is not allowed to live with her as he is just a poor retainer to the shogun. With his hidden blade, Nobuhira cuts down the evils in Edo.

Three years after the battle of Sekigahara (1603 AD), Okubo Changan invited Takasaka Junouchi, who is known as a former thief, to participate in the battle, but what will he get in return?

This story begins the year before the Battle of Sekigahara, in the pleasure quarters of the capital. Kagerou, a real beauty who is a child of the Ootani family, meets five of the most powerful men of the Uesugi clan while serving at a brothel.

In 1661, Yasui Santetsu is a member of the Yasui House of the Four Houses of Go. However, he's beginning to doubt that Go is his true calling. Outside of the Go house, he goes by the name Shibukawa Harumi, and he's fascinated by mathematical and astronomical problems. Specifically, Harumi is pouring all of his energy into creating a new Japanese calender.The story is based on the actual astronomer and calender-reformer Shibukawa Harumi (1639-1715). In Harumi's time, the Japanese used the Chinese lunar-solar Xuan-ming calendar, which had not been updated in nearly 800 years. At that point, there was already a two-day delay in the winter solstice. He reformed the calendar based on his careful astronomical observations.

The story takes place after the failed Shimabara Rebellion, led by Shiro Amakusa as a Christian uprising against the Shogunate. It ended...brutally, and Amakusa himself was executed. However, dark forces are at work, and Amakusa returns from the grave...

Following a horrific defeat at the battle of Sekigahara, two survivors, Takezo Shinmen and Matahachi Hon’iden, are deflated at having been unable to make a name for themselves and earn glory on the battlefield. But while Matahachi is anxious to go home, Takezo has vowed never to return and intends to become a vagabond, travelling the country polishing and testing his skills as a swordsman. With a beastial mercilessness when it comes to killing and a habit of cutting down all in his path, it doesn’t take long for Takezo to become a wanted fugitive. However, after being captured by a monk named Takuan and given a new lease of life, Takezo begins to live under the name of Musashi Miyamoto. Now, with a new view on life and death, Musashi continues to travel the nation challenging the most infamous fighters to achieve his goal of becoming the strongest samurai ever known.

The Yagyu Ninja Scrolls: Revenge of the Hori Clan

Seventeenth-century Japan: A rebellion in the Aizu territory has been brutally crushed, leaving twenty-one brave warriors dead and most of the nuns of the local convent slaughtered. Now the surviving nuns have sworn to seek revenge.