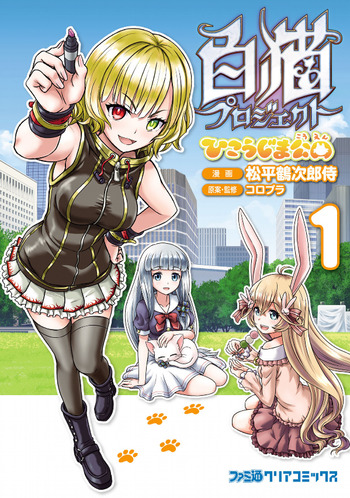 Last Period: the journey to the end of the despair

"I’m never going to give up!! For that reason, I became a Period!!” Evil demons known as "Spiral" -made of souls who died in agony- threaten the people of the world. In order to stand up against Spirals, people founded the "Arc End". Individuals whose skills are recognized are admitted to Arc End to become “Period” to fight for peace. Hal, who failed the Period admittance test 38 times, was accidentally admitted as an “Assistant Period” in Arc End 8th Squad. Forming a team along with other new members, Gazel and Liese, he is finally able to take his first step towards reaching his goal!

This story takes place 1000 years after Driland. Due to a certain incident, all the hunters in the world were sealed inside of cards. The protagonist Hagan becomes to key to freeing them, and travels as he gathers cards and fights along his friends as they mature.

The people of this world live happily, despite its inhospitable landscapes. Kureha and the other members of the Defense Squad living in the Irodori Settlement spend their days here in meetings to figure out how to get more people to play "Hagane Orchestra," the smartphone game they appear in. They'll do anything to promote their game! The inside story about the game? Its inner workings? Anything goes... be it friendship, determination, betrayal, or despair. A young man tells his story, along with the girls, his friends, and the Haganes. All work together as one, just like an orchestra...

In the medieval land of Driland, hunters explore ruins in search of treasures. Princess Mikoto dreams of one day becoming a hunter despite of her royal responsibility of one day assuming the throne of the country of Elua. Following the words of Bonny, an experienced hunter who is an inspiration to the future empress, Mikoto starts a journey with the desire to see the world and then come back to her homeland.