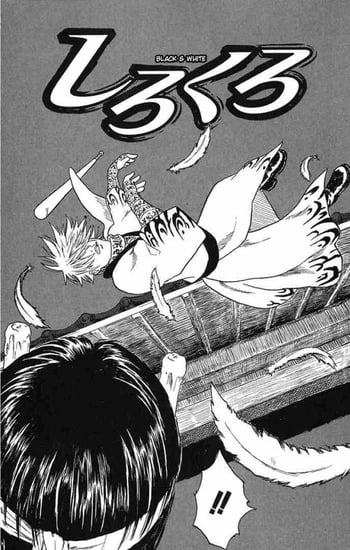 For some reason, the sadistic demon prince Beelzebub is living in the human world and attending high school. He begins a strange friendship with his classmate Hanako, after she defends him when he gets beaten up by a gang.

Akuma ni Itsukushimi no Te wo

With her love lost, Miwako promises to give her beautiful hands to the handsome demon Rin.

Shisa needs help because demons are attacking their village. Bara a ghost from the other side helps her.

An Onmyouji helps supress the evil inside a young samurai who is said to be the reincarnation of the legendary demon Shutendouji.

Kaho is being bullied by another girl. One day, while walking to somewhere, she is approached by a man with a goat's head...?

Sousuke is the class president, and is a stickler for the rules. Lately, he's had lots of problems. First of all, he's got to deal with his cute, but unruly, childhood friend Miroku. Secondly, they have a new transfer student, Enma, who claims to be from hell. Enma refuses to follow any rules but his own. Lastly, there's the giant, mysterious claw marks that have been appearing all over school buildings. With all this trouble going on, will Sousuke follow the rules or learn that sometimes there are more important things?

Foo lives together with his grandmother, but doesn't have any friends. One day, Foo gets lost in the mountains trying to find herbs for medicine. He meets Smoochy, a demon, who helps him. Smoochy doesn't have any friends either! They get along well and become each other's first-ever friends, and play together all the time. But Foo suddenly stops coming to the mountain...

Tears of a Devil

A demon called Jade is ordered by the king of the demon world to collect tears from a human being. When he arrives in the human world, Jade encounters a man named Cole, who he believes will be his perfect target.