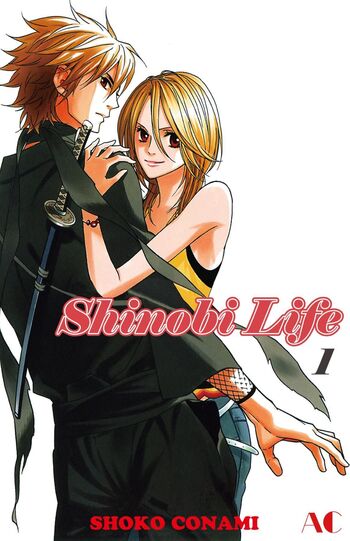 Beni doesn't care whether she lives or dies until one day a hero appears before her very eyes. And this hero, who swears his undying loyalty to her turns out to be none other than...a ninja from the past?!

Beni Fujiwara is your average high school student with a bit of a tendency to get kidnapped. One day she gets rescued by a man in a strange ninja costume. And he suddenly declares his eternal loyalty to her? Turns out her savior, a shinobi by the name of Kagetora, fell into a lake and travelled all the way from Feudal Japan to the present. It seems that Beni is a descendant and the spitting image of the princess he was serving. The two even have the same name! What will happen when he finds out she’s not the Beni-hime he’s looking for? Story Shinobi Life tries to balance a lot of things; it has the bodyguard theme going on, there’s time travelling, a good bit of action and some slapstick comedy. The first few chapters have a totally different feel from the rest of the story (it’s clear that the author wanted to take another approach in the beginning) and some of the events and character relations are a bit too convenient. Having said that, writing something that includes time travel is difficult and yet the author manages to tie up everything in a logical way. The plot twists are kind of predictable, but I still enjoyed them. Unlike many other titles in this genre, the romance itself wasn’t really the end goal, but instead more of a driving force behind everything that happens. Which is good, because not only do they avoid the dreadful will-they-won’t-they dance this way, the manga also offers other, more interesting sources of drama. The only complaint I have about it, is that it gets too melodramatic at times. Eternal, undying love is great and all, but I don’t want it to get smacked in my face all the damn time. Art While very pretty (albeit a bit uninspired), the character design can be quite inconsistent. The biggest offenders are definitely Kagetora and Iwatsuru who can look like completely different people, even within the same chapter. The author also seems really fond of screen tones, so you get a lot of pages covered in bubbles and bishie sparkles. Approximately 73% of the manga Backgrounds aren’t very prominent, most chapters look like a compilation of character reactions and close-ups. Characters The characters change a lot over the course of the series and I think a lot has to do with the shift in tone I mentioned earlier. Beni starts out as a strong, independent woman who don’t need nobody to tell her what to do and turns into… Well, someone a lot less badass. Don’t get me wrong, I still think she was strong in her own way and she definitely didn’t sit around doing nothing, but the sass she had in the earlier chapters just kind of disappears the more you read. She’s not the only who suffers a bit from this. Rihito Iwatsuru has a really weird case of villain decay, turning him from intimidating douchebag into a rather meek guy. Other than those two, the characters were quite fun. Kagetora is the perfect love interest and Hitaki is an antagonist you can sympathize with. It helps that there’s a lot of focus on their background story. Even the more minor characters turn out to play a big role in the overall plot, so nobody feels irrelevant. Overall Shinobi Life has its plot points intricately woven together. I can’t help but admire it for that fact. And it even has a decent amount of violence and fight scenes! You don’t find that very often in shoujo series. BUT! It still is a shoujo title, so all the usual tropes apply. Don’t let that deter you from reading it though. Romance, action and time travel is always a good combination, no matter what kind of demographic it’s aimed at.

So, since this page doesn't have a synopsis I'll give that first, then my review. Due to her family’s wealthy background, Beni Fujiwara is used to being kidnapped, held ransom and having her life threatened on a daily basis. In fact, she welcomes any chance to make her father feel miserable for the decisions he has made in the past concerning Beni and her late mother. However, Beni’s plans to get back at her father are ruined when Kagetora comes falling into her life…literally. Claiming that he has devoted his life to protecting the Red Princess, Kagetora becomes Beni’s new ninja body guard and she starts to have feelings for him. But, will Kagetora stay with her once he realizes that she is not the Red Princess and that he has actually traveled into the future?! Review time! So, pretty interesting story. It’s a good mix of cool ninjas and silly lovey dovey stuff. A bit of a SPOILER, Kagetora falls into the future via a wormhole of some kind that is found in the middle of a lake in the past and off the side of a building in the future (present day). The whole traveling to and from the past is sort of confusing at first and a little unbelievable since they typically fall back into the exact time that they need to even though it’s mentioned a few times that they can’t control the “when” they land in. But whatever, it makes the story interesting and allows for some cool ninja action in the present world.  I liked the relationship between Kagetora and Beni; it’s sweet even if it’s a little predictable. The story gets a little more complicated when Beni gets stuck in the past and meets a younger Kagetora and some of his friends, but for the most part it’s a pretty straight forward love story filled with misunderstandings, battles for the person you love and epic make up sex…okay maybe not that last part. Another time, another review.

I loved Kamisama Kiss so I decided to read this manga and I loved it as soon as I started reading it. It was absolutely perfect. I can't believe I'm saying this but I like it more than Kamisama Kiss. This will forever now be my favorite manga.