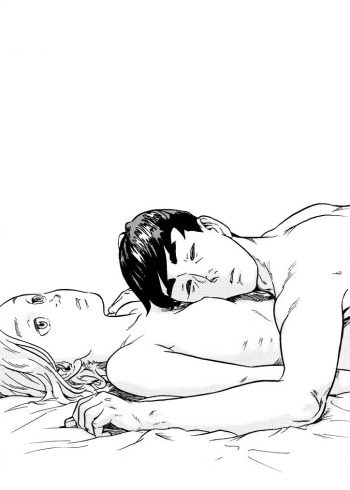 A boy asks his robot companion Omni for help, but the robot keeps getting the context wrong.

Jun receives a phone call from his wife Manami telling him that she's about to give birth, while he's at the apartment of his mistress Yoko. He promptly breaks up with his mistress and runs out the door to rush his wife to the hospital. Unfortunately, the elevator becomes stuck on the way down, and he's trapped with three strangers. To pass the time, they decide to share their deepest, darkest secrets. Jun can't help but be horrified by the criminal acts these seemingly normal people are capable of committing... and getting away with. Will a rescuer ever come, or will they be stuck in this nightmare elevator until they all die?

Menhera-chan is a pessimistic girl. Byoujaku-chan is a frail girl with a wild imagination and a love for BL. Kenkou-kun is a normal boy, in body and mind. This is the story of their dark and heartwarming daily life.

True love isn't something you awaken to... but something closer to a nightmare...

High school girl Mana, who despairing at life committed suicide, is reluctantly revived in another world. As an immortal female hero... In desperation Mana travels to the Devil's castle to be rid of her immortality. As even the devil can't kill Mana for good, she threatens him "If you can't kill me, I'll kill you. "New sensation, suicide desire comedy series!

What happens when you cross the animal kingdom with a sitcom that would never be aired on TV, and add a grandpa toilet whose job it is to eat turds?

The Rapeman, is a high school teacher by day and dispenses his surreal brand of "justice" at night under the business "Rapeman Services", which is co-run with his uncle, a former surgeon. He uses rape as his weapon. The business' motto is "Righting wrongs through penetration". Clients call on The Rapeman to handle cases such as the revenge of a jilted lover, forming parental bonds through a traumatic crisis, making disruptive co-workers more docile and other things of that nature. When engaged in his night trade, The Rapeman wears a black leather ski mask shaped like the head of a penis but no trousers or underwear. In the middle of a rape, if the woman became unresponsive or appeared to be enjoying the violation, he would use a "special technique" such as "M69 Screwdriver" or "Infinite Loop" to apply more pain to the victim. He sometimes has regrets for the contracts he fulfills, but he always does the job.