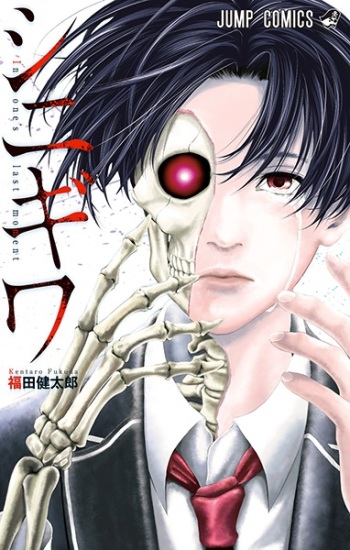 There are men and women that have the ability to control their shadows, molding them into shapes according to their will. These "Shadow Users" gain this special ability through some traumatic event from their past, creating darkness and sorrow in their soul. Call is a Shadow User, but his shadow, named Siva, was once human. Now, he is on a search to find the individual responsible for turning Siva into a shadow and return Shiva to his body.

Kyōsuke Hyōbu, an ESPer who was betrayed many years ago is now one of the most powerful ESPers, and also a fugitive. However, behind that glare lies a kind heart- His main mission is to save ESPers who are mistreated by humans, even if that be by force. Through his methods, he has saved many ESPer lives, and gained the loyalty of those he has saved. The name of his group: P.A.N.D.R.A.

Average young girl Kazuki Suou lived a peaceful life with older brother Masaki. That is, until she met Shirou Kusanagi, a boy with secret knowledge of her past, and the dark contract Kazuki was a part of in a former life.

Tabi traveled on a train to a town to meet her childhood friend, Kou-chan. When she arrived, she met Officer Nishimura and an energetic young man named Yukita; both of which were surprised that she came on a train that has never come before. Shortly after arriving, she discovers this town isn't ordinary in the least, and has puzzling problems. Certain roads in the town will try to "eat" people by randomly dropping them into a deep pit. The town resets after each day, making the same events as the previous day occur. The townspeople don't notice anything out of the ordinary, forgetting each time--the only exceptions being Tabi, Yukita, and Nishimura.

All Yoriko could remember from the night before was the red blood, the red moon, and an exceedingly bewitching red eye... The next day during class, being on the verge of remembering leaves her in a sickened state, and her classmate Kirin suggests she take a nap in the nurse's office. When Yoriko arrives, she notices nobody is around, so she decides to make use of the empty bed. While resting, the absent nurse returns to the office to finish the job she had failed the night before: suck Yoriko clean of blood. In the middle of the struggle, Kirin comes to save poor Yoriko from the demon nurse. Turns out Kirin and her brother Koryu are "oni."

Andy Hinomiya. The former investigator has gone on a vague journey. Where will his wanderings take him, and what does he hope to achieve? What does the light beyond the end reflect in his left eye?

A, B, AB, O - These are the common blood types with which most people are familiar, but there are rarer strains in the world, "hidden blood types." Individuals possessing these are called "strangebloods," and they are imbues with incredible abilities by the very blood flowing through their veins. But what happens when all of these disparate blood types come together? The result is rumored to be the legendary "Blood of Wisdom" which bestows god-like power. Little surprise, then, that more than a few unsavory characters are actively pursuing this awesome power. Can Chiaki Kaminaga and his friend Kaguya Daidouji survive this blood hunt...?

Haijima Yousuke, bored of life, casually wishes for the world to be destroyed, even though he hates fighting and involving himself with people. And yet, when a terrifying monster suddenly appears and strikes down his beautiful upperclassman Kitami Touka right before him, Haijima knows that this time, he must fight. However, there seems to be more to Kitami than Haijima originally thought.