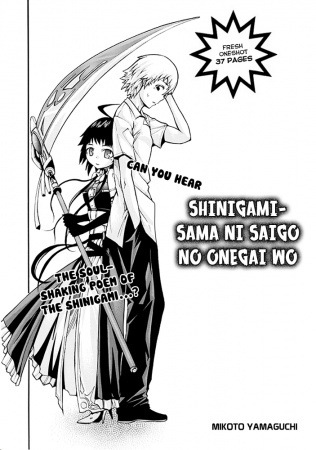 If you're looking for anime similar to Shinigami-sama ni Saigo no Onegai wo (Pilot), you might like these titles.

On the anniversary of his mother's death, Kurosaki Ichigo travels to his mother's grave. When Rukia arrives, Ichigo leaves to speak with her; but what she has to say upsets him. His sisters have a much bigger problem, however: they're being attacked by a particulary vicious Hollow with a few tricks up his sleeve. But this isn't any ordinary Hollow! Could it have something to do with the death of Ichigo's mother? Ichigo must discover the truth and fight the Hollow on his own to protect his pride.

Baishin -- a shinigami that was sealed by Soul Society for killing many of his own kind years ago -- has been set free. He escapes to the human world looking for people with large amounts of reiatsu (spiritual power) to absorb it for himself. Meanwhile, Ichigo encounters Baishin in the city and fights him, but ends up losing a large portion of his reiatsu. It is now up to Ichigo and the other shinigami sent by Soul Society to eliminate the threat of Baishin, before something terrible happens!

Hell – A place where beings that have committed mortal sins during their lifetime are sent. It is a realm where even Soul Reapers are forbidden to interfere. When a group of vicious Sinners plot to escape from this eternal prison, they discover that Substitute Soul Reaper Ichigo Kurosaki is the key to their freedom. The Sinners launch an attack and in the process kidnap Ichigo's younger sister Yuzu and take her to Hell. With the help of a mysterious man named Kokuto, Ichigo and his friends must now travel into the depths of Hell to stop the Sinners and save Yuzu, unaware that their actions could bring Hell to the World of the Living.