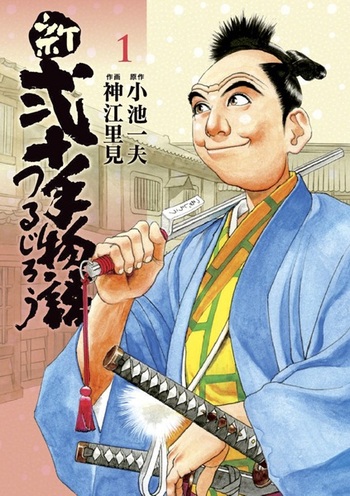 Proud to be a Samurai, even though I'm destitute.

Recounts the remarkable feats of an outlaw bounty hunter renowned as Rabid Dog. Follows the hero as he rescues the weak and battles the mighty.

Avenging his father’s murder is a matter of honor for the young samurai Jintetsu. But it turns out that the killer is a corrupt government official–and now the powers that be are determined to hunt Jintetsu down like an animal. There’s only one problem: Jintetsu is already dead. Torn to pieces by a pack of dogs, Jintetsu’s ravaged body has been found by Genkichi, outcast and master inventor. Genkichi gives the dead boy a new, indestructible steel body and a talking sword–just what he’ll need to face down the gang that’s terrorizing his hometown and the mobster who ordered his father’s hit. But what about Otsuki, the beautiful girl he left behind? Steel armor is defense against any sword, but it can’t save Jintetsu from the pain in his heart.

A peasant named Hanbē asks a girl named O-haru for her hand in marriage, but O-haru confesses that she is already thinking of another man named Masakichi from a neighboring village. When Hanbē seeks out Masakichi, he finds that Masakichi possesses a sword and the skills to use it, despite being a peasant.