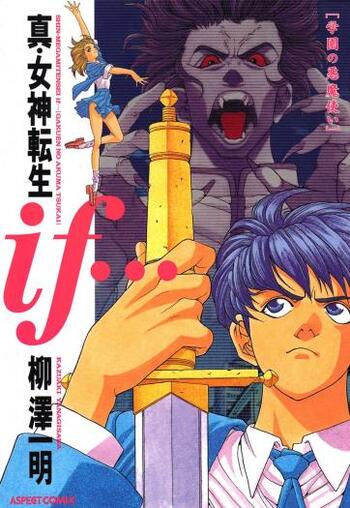 Long ago the world was split in two: the realm of darkness inhabited by demons, and a land of light where humans dwell. When the king of the dark world decided to unite the two lands, a war broke out that was ended by a dark knight named Sparda. Now the legend of Sparda is nothing but a fairytale, and while most have forgotten it, the bloodline still lives on. Dante is Sparda’s half-human son who, using his twin guns Ebony and Ivory, works as a demon-slayer for hire. One day, his friend Enzo tells him of a new job and with a hefty reward on the line, Dante accepts. In order to claim his reward, Dante must locate a missing girl named Alice, but when his search leads him to a nightmarish wonderland, he must confront his past as he becomes involved in a plan to break the seal to the demonic realm and engulf the world in darkness once more...

Narumi Detective Agency is where the people of very early modern Japan go to for help with mysterious and supernatural cases. But Narumi is just the face and occasional fist of the operation—the real hero is Kuzunoha Raido, the devil summoner, a stoic young man who seems to seek no credit for his accomplishments. As a powerful devil summoner, Raido can call upon many different demons to assist him in solving cases that deal with other demons causing harm in the human world. Lately, there has been a surge of cases. A powerful summoner seems to be behind all these incidents. Is the Narumi-Raido combo strong enough to overcome a demon force more powerful than anything they have experienced before?

Follows Nero, a teenager possessing demonic powers who is on a mission to stop the series's main character, Dante, after he assassinates demons and the leader of the Order of the Sword.

Devil May Cry 5: Before the Nightmare (Light Novel)

Several years after the Order of the Sword incident, Kyrie and Nero (who are living together) are approached by the weapon artist, Nico. While initially wary of her rude demeanor, Nero gradually warms up to her. However, some time later a certain demon attacks Nero. At the same time, Dante's informer Morrison introduces him to the mysterious V who has a request for him. V tells Dante that suppressing this demon is Dante's reason for fighting.

After demons break through into the human world, Tokyo must be quarantined. Without power and stuck in a supernatural warzone, 17-year-old Kazuya has only one hope: he must use the COMP, a device created by his cousin Naoya capable of summoning and subduing demons, to defeat the invaders and take back the city.

A spinoff story from the viewpoint of the mysterious man V