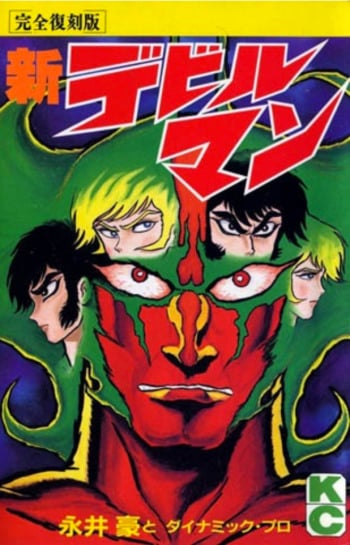 Alma is born a witch after her father makes a deal with the demon Mephisto. She seems to be able to travel through time and goes back to the middle ages in Europe, the Mayan/Aztecian time as well as the Roman ancient time and Nazi Germany.

Kenzaki Makoto, a debuting sculptor, was arrested as the serial killer of the Yokohama Line series of murders. He insisted that he was innocent but was sentenced to the death penalty. He was executed 11 years after the crime. But when he reopened his eyes, by a twist of fate, he had returned to 11 years ago, 25 days before the crime was committed. Burning with the desire for revenge against the real murderer, Kenzaki begins to take action. The only one he can trust is HIMSELF. The crime suspense story of two selves fighting against fate unfolds.

Tsubaki has the power to understand mountains. She adventures from one mountain village to another trying to bring peace to mountains that are disturbed by people.

Jean, the sole heir to a fortune and mansion, is stuck in an endless loop, repeating his brutal murder over and over again. As the 100th time comes, he brings forth incredible determination to fight back and save his servants from their needless murder.

One day a mysterious woman appears all of a sudden before Makoto Akimoto, a fifth grader in today's Heisei period. But when Makoto is led by this woman to Kyoto in the last days of the Tokugawa shogunate regime...!? Moreover, what they find there is a mysterious world where weird creatures are springing out! What fate awaits Makoto?

A bright-spirited young historical scholar, Iba, disappears while on a lone expedition to study the ancient Silk Road. A year later his girlfriend, Kyoko, sets out for the Silk Road in order to find clues that will help to unravel the mystery of Iba's disappearance. When she arrives, she finds the charm she gave Iba for protection and moments later she is sucked into a black vortex and loses consciousness. Koyoko awakes to find herself in a very different place and discovers that that Iba is not only alive but is a warrior-slave under the reign of Genghis Khan in 13th century Mongolia! At last, when Iba and Kyoko reunite, they find that there are a series of fates, crueler than the ones they have already endured, awaiting them...

It begins in 1638, during the Shimabara Rebellion, where a powerful swordsman who should have died is instead transformed by an arcane ritual into a demonic creature. As time passes, more swordsmen facing death go through this transformation. What could these new, demonic swordsmen be planning?

The Muromachi Period was a time when nightfall brought true darkness. Set in this era of gloom, the tale of GAGOZE, a violent demon feared even by the monsters, is about to begin!

Hiroyuki, a delinquent famous in his local area, is challenged to a fight by a mixed martial artist.