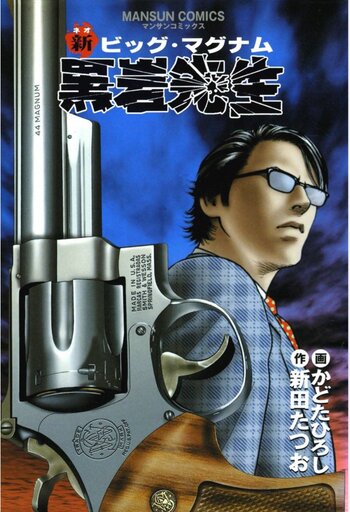 A beautiful American blonde who's on the run from the mob turns to the City Hunter team for protection, and Kaori and Ryo are weak when it comes to million dollar rewards and smoldering hot clients, respectively. After a few rounds of ambushes and sexual harassment, the deal is starting to look more than a little fishy, and Ryo is not usually slow on the uptake, despite appearances would suggest. Sure enough and once again, things are quite not how they seem: Ryo finds himself tangled in a web of conspiracies and the only way through is paved with explosions, gunfire, and stolen lingerie.

A large new hotel complex is opening and the City Hunter team is invited. Unfortunately for Ryo, he forgot the address so he's doomed to walk the streets starving, while Kaori and Miki get to hog the free food. However, the complex is controlled by a state-of-the-art supercomputer, which attracts a group of terrorists who take the whole building hostage. It's up to Ryo and Umibouzu to shoot their way in to get their share of the food... and stop the terrorists before they can complete their sinister plan!

Yet again, the City Hunter team is desperate for work. After Kaori flat out rejects the "work proposals" Ryo receives from a lady friend with rather questionable motives, their dry spell ends only when a famous foreign pianist comes to Falcon's cafe looking for their help: her father, long thought to be dead, might be living underground in Japan. The only clue, an old medallion that belonged to the client's mother, does not seem promising but surprises always come up when the City Hunter starts investigating...

It's XYZ's last stand, as legendary sweeper Ryo Saeba takes a final tour of Shinjuku. With his partner Kaori by his side, Saeba will take on his biggest cases yet. Ghosts of he past swirl among Cinderella rhapsodies, sorrowful revenge, and mokkori (of course!) loom around every corner. All the while, one final showdown with a fierce foe from a faraway land awaits...

City Hunter Ryo Saeba's new client is Emi, a stage star who is looking for her long lost brother. But soon after starting, they are attacked by an international criminal mastermind known as the Professor, and it becomes clear that the case is going to be more exciting than just a sappy reunion. When someone of the Professor's caliber is in town, the police get worried – for a reason. But what is his real purpose for coming to Tokyo, and what is his connection to Emi? Ryo Saeba and his friends are once again in the thick of the action, and the fates of the city and Emi lie in their hands.

The City Hunter Ryo Saeba has been without customers for four months, so his partner Kaori is understandably overjoyed when a customer finally contacts them. As the customer happens to be the striking Mega City TV newscaster Sayaka, Ryo has trouble containing his excitement too. But while it seems not even Kaori's wrath can dissuade Ryo from his lecherous antics, things take a more serious turn when they have to escape a seemingly endless stream of hired killers who come after them. And when Sayaka's employers set Ryo up as a kidnapper and killer, Ryo has no choice but to get to the bottom of this weird case!