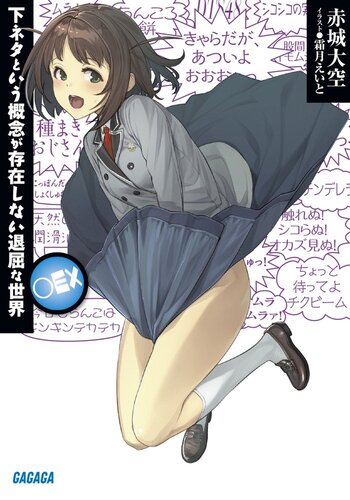 If you're looking for manga similar to SHIMONETA: A Boring World Where the Concept of Dirty Jokes Doesn’t Exist OEX (Light Novel), you might like these titles.

Shouta Yamakawa is in love with manga…and the 2-D girls in it! So when a casually uttered wish to have the lovely, frail Sora Nagihara-his favorite comic heroine-by his side comes true, Shouta can’t believe his eyes! But he quickly learns that while this Sora is just as cute as the one in his comic books, “frail” is the last word that comes to mind for her personality! She’s one bold, brutal babe, and she’s ready to bring the world to its knees for him, her new master?!

Junichiro Koizumi: Prime Minister of Japan, or God of Mahjong incarnate? Watch him clash with other world titans such as George W. Bush, Kim Jong Il, and Vladimir Putin in the one force that matters in the political world: mahjong.

A new academic year means new members for the lovably misfit Genshiken: The Society for the Study of Modern Visual Culture! Club president Chika Ogiue now has to manage a fresh-faced trio of yaoi fans (one of whom dabbles in cross-dressing), a surly American transfer student with a penchant for obscure anime quotes, and her own rising career as a professional manga artist. Can she actually find time to draw her own vanity project for Comic-Fest?

A charming girl is cursed to need the bathroom whenever she's nervous, and a reclusive boy has a special power that helps her hold it in.