Shigekikei my Hero: Ore no Honki wo Misete Yaru - Recommendations 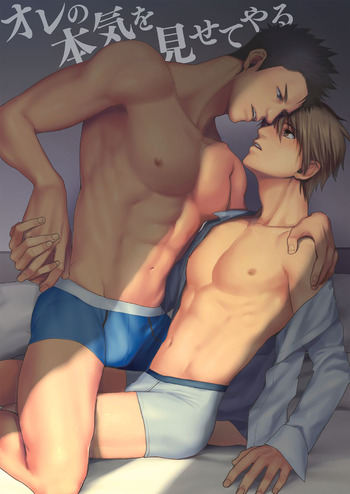 If you're looking for manga similar to Shigekikei my Hero: Ore no Honki wo Misete Yaru, you might like these titles.

Maeda Mamoru, 43 years old and Shirasu Christopher, 31 are both actors who have been working as detective partners in a crime series for 4 years. The drama they're airing has quite successful ratings especially among their female admirers. And so due to their popularity, some BL fan fictions were even made, vaguely based on their bromance duo on screen. Mamoru, after reading some of the erotic stories in question, starts to become more aware of his colleague's presence, that is to say Christopher, especially when hugged by the latter. How long will Mamoru-chan be able to act as if it's nothing, suppressing all kinds of desires despite his fantasies becoming more and more wild...

Model and TV personality Kyosuke believes that there is nothing he can't get through his skills in the bedroom, and with his good looks and sexy body, the world is his oyster! When a staff member rebukes his advances one day, Kyosuke won't just let it slide - but when this Fujishima actually takes him up on his offer, is Kyosuke ready for the feelings he'd end up awakening?

Well-poised and blessed with good looks, Yuki Yamamuro is a talented young actor that no one can take their eyes off of. He's been toying with a young and seemingly innocent actor named Mitsuru Sawaki, but it’s actually the other way round... it’s Mitsuru that’s toying with Yuki. To make matters complicated, Ohtaki, the producer of show “Casual Lover,” is also after Mitsuru, and has decided to cast both of them on his show. The show has just begun on this game of love between two men who have their pride at stake!

Kikasete yo, Ai no Kotoba o

Young actor Hinase, together with experienced actor Saiga, are secret lovers. Just 19 years old and possessed by heat, while Saiga always stays calm, makes Hinase feel like he's being looked down upon and seen as a child, which makes him very angry!! Always being seen this way by Saiga, and having enough, the two are still no reconciled. As a result, Hinase wants to fool Saiga more and more?! This is simply two men who like to love each other in this manner!