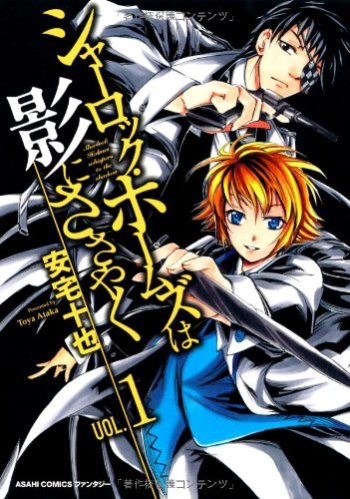 Christie Holmes is a prodigy. At ten years old, she's as familiar with the sciences and classics as any older student at Cambridge or Oxford. And her facility with logic is reminiscent of her uncle, the eminent Sherlock Holmes himself. So, what's a brilliant young girl to do when her parents are away in India, leaving her behind in the care of maids and servants? Why, solve mysteries, of course. Along with her giant hound Nelson, Christie's implacable curiosity leads her from one dangerous adventure to another, often joining forces with Uncle Sherlock and Doctor Watson on their famed investigations. Christie may look pint-sized, but her clever mind is never to be underestimated!

Sherlock Holmes' 17-year-old niece Christie is just as intelligent as her uncle. A lot of things are expected of a young woman from a good family, like Christie, but she has little patience for balls and fashionable corsets. Although she appreciates the maids who care for her, she'd rather spend her time working on interesting cases.

Before he was Sherlock’s rival, Moriarty fought against the unfair class caste system in London by making sure corrupt nobility got their comeuppance. But even the best-intentioned plans can spin out of control—will Moriarty’s dream of a more just and equal world turn him into a hero…or a monster?

A new take on a classic tale, Sherlock Holmes and Dr. Jane Watson attempt to solve a strange and supernatural death in a fictionalized version of 19th century Britain. With the country at war, Sherlock and Jane soon realize that they have uncovered an intricate network of secrets that leads to a much larger and more dangerous plan that puts the whole world at risk.

Inspector Scott, an obsessive investigator who has set up a special section for unsolved cases at the London Metropolitan Police. Noing, an alien who came to Earth because he wanted to be a great detective, suddenly came and decided to try to unravel the labyrinth case that shakes the citizens of London! Thanks to Noing's super-technical device that sees everything on Earth, the criminal is immediately identified, but no evidence of arrest is available. So what does Inspector Scott do? This is a reversal mystery!