She Professed Herself Pupil of the Wise Man - Reviews 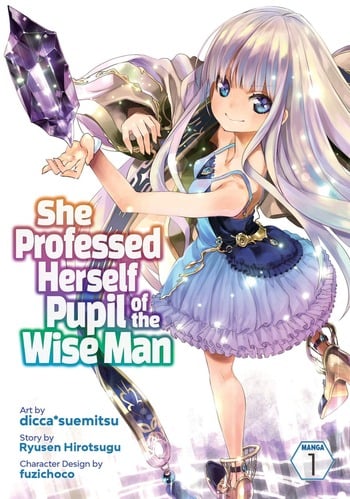 She Professed Herself Pupil of Wise Man focuses on a VMMORPG 'Ark Earth Online’, an online game that appeared 4 years ago. It first appeared on a late-night T.V. ad in the form of a VR access code. Sakimori Kagami is a player that decides to try the game. Sakimori plays as a summoner and his player character looks like an old man, like any magician should look like. One day he purchases an appearance change item to see how he would look like, if his player character were a girl. However, when changing the character’s appearance, he falls asleep. When he wakes up, he notices that instead of being an old magician, he has used as a main character for so long, he is now a little and fragile girl that is trapped in the world that reminds of the game he has been playing for a while now.

Sakimori’s summoner is called Dunbalf, a very powerful magician that is highly respected among humans, demons, fairies, spirits; there is hardly anyone that does not know the magician Dunbalf and how he looks like. But Dunbalf is no more, because of Sakimori’s mistake, he is now Mira, a young disciple of Dunbalf himself. The storyline focuses on Mira as she finds out more about the world she lives in now. And that is it. I would not say that a story like that is anywhere new and that it offers anything unique to the reader. On top of that, it will take somewhere 16 chapters for the story to show some kind of a development and what it is all about. Having read 16-20 chapters, the story will be much better, so give it a chance and do not drop it after 2-4 chapters.

However, even when the story starts showing its colors and you start to understand what it is going to be about, the main problem is that this manga is somewhat boring; there are too many unnecessary episodes that have nothing to do with the story and character development. Do not get me wrong, though. It is not that bad and has a potential to become even better in the future chapters, if it focuses more on the actual plot than on bathing lolis and some other unnecessary episodes. If it does, time will tell. But for now, it is a 7/10.

While the main character isn't a woman originally her appearance is that of a child, and it's refreshing to see how people treat her as they remember she was once a respected man. Honestly the story is one you've probably read before but the treatment this little girl receives makes it interesting and original.

(20 chapters in then dropped)

Read this if you want:

The tone of the story is lighthearted with a bit of mystery, which would normally be great and all but the story drops you in the middle of nowhere and expects you to follow along. We don't know anything about the world, there is no world building, we don't know anything about any of the characters or their motivations (including the MC's). Immediately on being reborn into this video game world, the MC is whisked away on a plot with little to no rationale. From community discussions, it seems like the manga skipped out on way too many details present in the original source, but I wouldn't know since I haven't read it. Because of this lack of details, the story feels highly rushed and without a focus.

Ignoring the rushed premise, the story feels unrealistic to an uncanny degree. The actions of the characters don't make sense based on the world the story is set in. Any more would be spoilerific, but just be warned. Ignoring these two faults, the story is okay and can easily be shaped into a great story.

I usually don't critique art, but perhaps because I was annoyed by the story I couldn't help but critique the art. The character's reactions are lacking, focusing on the MC's (who is a 12 year old child) panties is just gross, and there is a noticable lack of detail on things which for all right should be detailed. At times, its hard to tell which character is which (especially since the story was rushed) since they share the same basic traits.

The supporting cast don't get much characterization. The ones which do seem shallow and overwhelmingly without debt. A lot of characters seem to have the same personality befitting their category of NPC's which is unfortunate. The MC herself is seemingly average, but her actions don't seem to make sense.