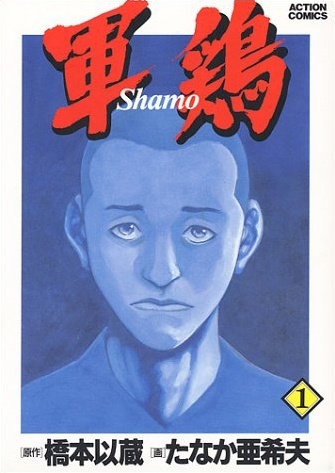 Yuu is a high school kid who doesn't really fit anywhere. To find a place he can belong, be accepted, he will do anything. However one thing leads to another and he is forced to fight to keep his place, his holyland.

Both mangas deal with the same theme - a fragile teenager needs to learn martial arts in order to survive (however Ryo from Shamo is an addult after the initial arc), but holyland takes a more lighthearted approach to it. If you don't like the brutality of shamo, maybe give Holyland a shot.

Shamo's first arc, which lasts a few vols, is very much like Rainbow's story, revolving around delinquents in very harsh situations. The difference being in Rainbow, the difficulties lie with the staff/conditions, while in Shamo, the difficulties lie with the other inmates. Both have disturbing themes, as well, though Shamo is far more explicit/graphic.

Ken lost his family as a child, and when he confessed to the girl he loved from afar, Yumin, he lost her too in a very different way! For Yumin made her own confession: she's actually Korean, and left for her homeland to become a police officer. One year later, Ken leaves Japan to find his lost love, unintentionally becoming the leader of a brutal Korean gang in the process! It's tough to stay alive in the underworld, but Ken will try his best to keep the peace and rise to power, even though all he wants is a date with the lovely Yumin.

Both these series are dark and take alot of readers out of their comfort zone. Sun-Ken Rock has more of a heroic lead than the Anti-hero in Shamo, but they both have equaly horrific tales. If you liked Shamo then you will most likely enjoy reading Sun-Ken, ecpecially after the 5th volume.

Kiichi Niyazawa is a young, but tough "Darkfighter" who participates in underground, no-holds-barred mixed martial arts fights to earn enough money to look after his sick father. As mafia boss Rikimaru’s ace, Kiichi lives, eats and sleeps fighting in order to beat any opponent and save up as much cash as it takes to cure his dad. However, in a world of underhanded mafia using whatever dirty methods possible to win each bout and collect on their winnings, Kiichi’s determination to have a fair fight is a rarity. Now the honourable lad must fight against opponents that are out for blood, but can he really win and rise to the top so he can gain the strength he needs to cure his father and take revenge on the man who put him in hospital in the first place?

Both manga have over 100+ chapters, features a wide variety of martial arts and gorey scenes. They also both have really good plot development/characters.

The devastation caused by the Kantou Hell Quake sunk the buildings in the center of Tokyo deep beneath the waves. A great number of human lives and and a great deal of property sunk along with them. There's no shortage of people aiming to claim these sunken valuables. Many of those people are pirates, who arrived from overseas in salvage ships of unknown nationality. Every night, these pirates raid the chain of small islands, which all that remains of the Kantou region, and assault the survivors. However, there was no one who was able to stand against the pirates! It was a completely lawless zone. It was Japan, but not Japan: A land and a people completely forsaken by their country. That is, until Violence Jack rises from the ocean to help the islands' inhabitants fight the pirates and their allies, the New Shu Army.

September 11, 197x, In the whole Kantou region a magnitude 8-9 violent earthquake occurred. Scholars called it the great destruction of the Showa Era, but the people called it the earthquake from hell! Volcanoes erupted, buildings crumbled, Tokyo became decimated in a single day. The government, after failing to recover the city, abandons Tokyo and moves the capital. The survivors form a society with no laws. In this harsh lawless world emerges Jack, a 10 foot giant who annihilates anyone and anything in his path. The manga details his journey.