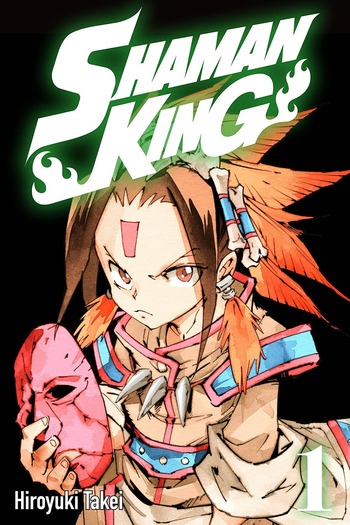 Shaman King has always been my favorite since i was growing up. It has alot of seriousness and at the same time it has alot of comedic parts. All the shamans who are participating in the battle all have different reasons to why they want to be the shaman king. My favorite character is Chokorabu because i love his lame puns and his reason for why he wants to be the Shaman King. If you love comedy + action packed mangas you will love reading Shaman King.

Shaman King is a manga clearly engineered toward more of a younger audience, similar to manga such as One Piece, although for a slightly older audience.  There is no graphic nudity, sexual innuendo, or other inappropriate content which parents would deem unsightly for children.  While there is a good amount of violence with the plot being based around shamans fighting each other, it's not excessively gory in comparison to other manga and like One Piece, even when there is a lot of blood and stuff, the author still manages to downplay it from a more serious manga like DeathNote.  The characters and artistic renditions maintain a more childish artistic style clearly not intent on perfectly mastering all aspects of drawing the human body.

In terms of the plot, I found it very easy to follow.  There's a clear succesion of what comes after what and the two sides are very well distanced and distinguished with who's on who's side.  About the only thing that's wrong with the plot (and this is agreed upon by many) is the fact that the ending is not at all an ending.  If this was a movie, it would definitely leave room for a sequel if not a sequel of a sequel.  There's a small OVA-sort of manga after it, but it doesn't really add anything into the main story.

The characters of the story appeal to a lot of different readers.  You have the main protagonist, Yoh, who is the little child hero that every boy wants to be.  He's strong, but has a cool laid-back attitude.  His wife to be, Anna, (perhaps the only element of the story which was a bit shocking to read at first), defies the traditional female stereotype.  She's a strong internal person, but appeals to those who have a lot of internal turmoil that they keep locked up inside.  We never see much of her in combat, but we know her abilities are no pushover.  Joco represents the kid who's been through a lot of trouble, mixed with the wrong crowd, but has a good heart and does the right thing in the end.  Ren represents the kid who wants to be perceived as tough on the outside, even though he has his soft moments and will do the right thing when it comes down to the wire.  Horohoro is actually more like the normal kid who's reluctant to get too involved with anything.  He doesn't try to involve himself too much in stuff that's not his business, but can lend a hand to his important friends.  Ryu is the older role model that little kids look up too with his cool haircut and more mature (and sometimes perverted) attitude.