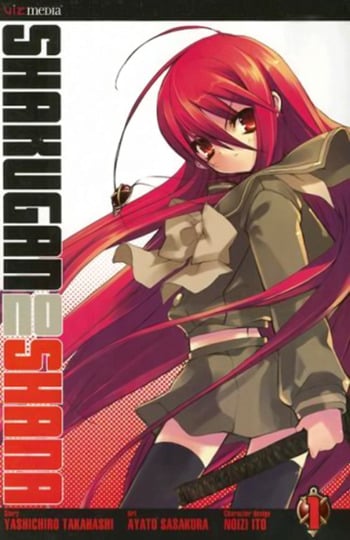 Shakugan no Shana is a fantasy anime title with a touch of drama. It manages to retain its fantasy element while keeping a high level of teenage high school romance-related drama in terms of unrequited love between a few of the characters. Shakugan no Shana never leans towards one side completely. The fights between Shana and the Guze no Tomogara are consistent and never drawn out or cut short. There is rarely a lengthy time span separating the fights to make a viewer question if one is coming up. This allows room for episodes that develop the characters beyond the war at hand.

While the fight in the initial episode may rake viewers in from the start, a number of things are thrown out from the second episode, making it a little difficult to get into the series. There is much foreign terminology used frequently. Words like "Rinne," "Mistes," and "Reiji Maigo" are part of the characters' vocabulary. The abundance of new words may be a challenge to grow accustomed to, especially since foreign words are continually introduced as the series progresses.

In terms of comparing the storyline and characters, the people in Shakugan no Shana are far more interesting than the plot will ever be. Shakugan no Shana's storyline never really escalates beyond what is set from the start. A handful of new characters that appear later don't necessarily help out the shallow plot. The series throws a curve ball in the form of dull side characters who are supposedly important to the storyline. Predictability weighs down whatever surprises the series strives to create. Thankfully, the main cast of characters is much more intriguing than what path the story decides to stroll down.

I typically only read Manga when I've already watched the Anime show that was derived from it, and this is a case in point.  I've watched all of Shakugan No Shana before and loved it, now I am reading the Manga, and the stories do correlate pretty closely.  The main difference is that in the Anime, Shana takes much, much longer to become aware of her emotions towards Yuji, much less understand and act upon them.  In the Manga, Shana is aware much more quickly that she has feelings for Yuji.  Although I think the Anime dragged this out agonizingly long, I think the Manga rushes to this revelation a little too quickly.

Still, despite how tortuously long it takes in the Anime, when Shana finally tells Yuji she loves him, it is VERY emotionally satisfying...I think I exclaimed aloud "FINALLY!!!" at the time.

I like the idea that, as a magical creature who left her humanity behind long ago, it takes Shana longer to remember and relate to human emotions...I'm glad the Anime was modified from the original Manga to include this difference.

I read volume 1 from my local library, but they don't have the complete collection, so I may have to obtain the later volumes via Interlibrary loan.