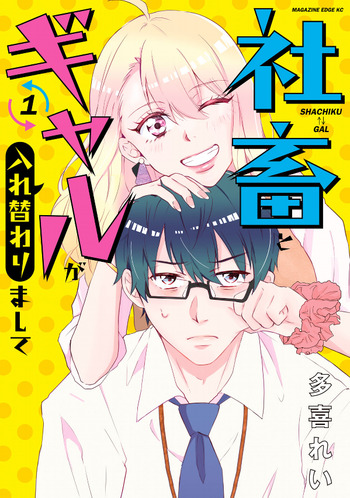 If you're looking for manga similar to Shachiku to Gal ga Irekawarimashite, you might like these titles.

If you liked this, you'd definitely like this! Both feature an adult and teenager pair that exchange bodies and are forced to try deal with each-others lives!

Otoko to Onna no Kankei Desu.

Akiyama Youichi is a high-school boy who adores the cute Nana-chan from afar but he's clueless about girls and terrified of asking her out on a date. He discovers in a very peculiar manner that he has a love rival for Nana-chan's affections in the curvy and sexy shape of Natsuhara Yuri, a classmate and best friend of Nana-chan. The battle for Nana-chan's affections is joined with Youichi trapped in Yuri's body and Yuri using Youichi's body to ask Nana-chan out on a date. May the best, umm, person win!

Science geek Yuuhi Toganou has just invented the girl of his dreams, Momo-chan! But right as he anticipates losing his virginity to his creation, gyaru girl Sara Ayanokouji interrupts him and pushes the button that activates Momo-chan. Yuuhi's creation explodes, and when the dust settles, he finds out that he and Sara have switched bodies! Sara is calm about it, saying she's always wanted to be a boy, and she has plans of doing everything it means to be a man, including sex! Will Yuuhi's former body lose its virginity before his soul does!?

As punishment for slacking on the job, the shinigami Lapan is ordered to go to the Human Realm in the body of a skeleton to retrieve a wandering soul. However, much to Lapan's lecherous delight, a slip-up lands his soul in the body of the young Alice, a buxom student at a local all-girls' school. With the skirt-chasing shinigami (as Alice) leaving a storm of sexual harassment allegations in his wake, whatever is poor, beskeletoned Alice to do?!