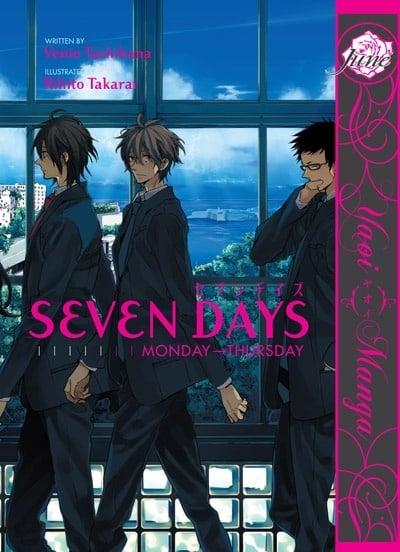 Only the Ring Finger Knows

Wearing a ring holds a variety of special meanings. Wearing one on your right middle finger means you are single; matching rings on the right ring finger shows friendship; and matching rings on the left ring finger signifies a couple. Wataru wears a single ring on his right middle finger and never thought it was a big deal - that is, until one day he discovers that he wears the exact same ring as his hugely-popular upperclassman Kazuki. However while Kazuki's reputation paints him as a kind and friendly boy, he is nothing but cold and ill-tempered towards Wataru. Finding his senior to be little more than a jerk, Wataru finds the existence of their matching rings to be thoroughly annoying. As their paths cross more often, Wataru begins to question his true feelings, but why is it that the supposedly gentle Kazuki is only cold towards him? 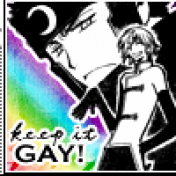 Both of these shounen-ai manga are sweet and innocent and throughly non-graphic, which can be frusteratingly hard to find sometimes. Both are set in high school are feature a sempai and kohai pair. (Only the Ring Finger Knows is told from the kohai's point of view while Seven Days is split, but mostly follows the sempai.) In both manga, the couple barely know each other and fall in love as they learn about each other's strengths and short-comings.

Both manga have a gimmick: in Only the Ring Finger Knows, matching rings are popular at the school as a way to show who are your friends and, more importantly, your lovers. In Seven Days, the kohai is well-known at the school for dating any girl for a week and promptly dumping them at the end. Both couples set foot on their paths via a misunderstanding.

Arata who is in love with his childhood friend Miyamoto, always eavesdrops on the confessions his friend receives from girls but Miyamoto constantly rejects the confessions saying he already has someone he likes. One day Miyamoto catches Arata eavesdropping and asks, "Want to know who?"

These are both amazingly sweet BL manga that will leave you all fluffy and warm inside, but not before making you want to cry first.

Only the Flower Knows

Youichi's life at university is going just fine. He isn't having any trouble with his classes, he has plenty of friends, and even a cute girlfriend named Minami. Then the day comes where he meets Misaki. Misaki is a reserved, stand offish fellow but for some reason, Youichi can't seem to get him out of his mind. In fact, he can't seem to stay away. When he lands a job working in the lab with Misaki, it seems more than just the flowers are about to bloom. But will they recognise their emotions for what they are, and have the courage to accept it?

If you enjoyed Only the Flower Knows, you will definitely like Seven Days, and the same for the other way around. Both are great shounen-ai with a pacing that doesn't feel to slow or too rushed. Both have characters that are slow to accept their feelings for another man, with all characters being lovable in their own ways. Also, if you are more of an art-centric person, both are drawn by the same artist who has a cute drawing style. I read both in the same day and loved both equally, though Seven Days is a bit shorter.

The meeting of Haruto, who dreams of being a singer-songwriter, with Akira, sparked by a traffic accident—?! When Haruto, a lonely singer who never sings, suddenly becomes able to see ghosts, he meets Akira, a ghost with the skin of organdy. Apprehension turns to friendship, and friendship turns to…?

If you liked one of these you'll surely like the other. Both are sweet, innocent shounen-ai series that focus on friendship and slowly developing stronger feelings for each other. Seven Days is a bit longer and only focuses on their relationship and the troubles concerning it. Lonely to Organdy has supernatural elements and is more of a drama. Both are great mangas and I highly recommend you read both of them.

A story about two boys, Kiyo and Ino, who go to different schools but take the same train every morning. As time passes by they become aware of each other but never engage in conversation until one day when Kiyo oversleeps in the train and is awoken by Ino. From that point on they begin talking to each other and eventually become good friends...

Both series are BL romances between two fairly ordinary guys from, born from a set of seemingly trivial events.

The Less Than Epic Adventures of TJ and Amal

In the span of a single day, Amal Chakravarthy calls off his arranged marriage, comes out to his conservative parents, promptly gets disowned, goes on a bender . . . and wakes up the next morning to find TJ — a lanky, dreadlocked vagrant—frying eggs and singing Paul Simon in his kitchen. TJ claims that the two have made a drunken pact to drive all the way from Berkeley to Providence. As it happens, Amal promised his sister he'd be there for her graduation from Brown University. And TJ, well . . . TJ has his own reasons. The agreement is simple: Amal does the driving, TJ pays the way — but a 3500-mile journey leaves plenty of time for things to get complicated.

What if you had one week to get to know someone? That's the premise of these BL stories. In one, a teenage couple date for an experimental week that neither one wants to see come to an end. The other story features a pair of young adults - complete strangers who have just met - who go on a week-long road trip to escape from their problems... and quickly find themselves attracted to each other. In the end, each person must decide what it is they actually want when the week comes to an end.

For My Cherry Blossom

Minoru Kanbara is a stubborn, clumsy and somewhat naïve high school student with a secret love for his classmate, Yuuto Matsunaga, the class playboy with the face of a J-pop star.Matsunaga, nicknamed "love butterfly" is always going from girl to girl. Kanbara tries to be content as Matsunaga's best friend, but one day it's too much and he declares his love for his straight friend. Does Matsunaga have the courage to face the change in their relationship, or has Kanbara lost everything?

Koizumi's first love rejects his confession on the last day of elementary school. Forced to move to another town, years later Koizumi returns. At the start of high school, Koizumi and his first love are reunited.

Etsushi Fuwa is your typical playboy high-school student. He dates several different girls at once, usually spends his nights in clubs or bars, and often seduces rich older women into giving him money in return for his... services. Aimlessly drifting through life with nothing to care about and no-one to call a real friend, he happens upon fellow second-year Sou Kusanagi, who is well-known for being both a 'spunky midget' and a rabid fan of motorcycle racing. Something about this ambitious kid with his bright, confident eyes and never-say-die attitude intrigues Fuwa. Figuring he can always quit whenever he feels like it, he pretends to know all about motorcycles and asks to be Kusanagi's partner for an upcoming two-person racing event.

Soft-hearted Takashi got caught up in a love game of the playboy, Kurose, all because he happened to see the love affair between those two boy at school! Kurose is such a dangerous guy, he even laid hands on the professor! The reason why Kurose cares about the unappealing Takashi is…!?