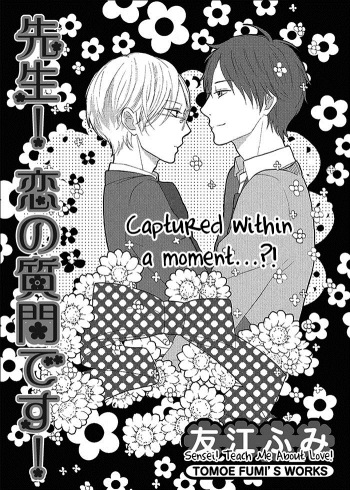 If you're looking for manga similar to Sensei! Koi no Shitsumon Desu!, you might like these titles.

A cram school teacher, Uno, reunites with his former student and lover, Someya. Uno, who couldn't throw away his feelings for Someya, accepts his proposal to "be in a no-strings attached lover's relationship" and sleeps with him. The two spend their days peacefully and happily like the time when they were lovers. Then, by chance, he happens to witness Someya entering a love hotel with a woman. Uno presses for the truth, but senses something wrong with Someya's reaction...

After being dumped by his girlfriend, Iijima (a tutor) is confessed to by his shy student Daisuke. The incident takes Iijima by surprise... and it also makes him realize that he's gay. But the 5-year age difference and his position as Daisuke's tutor makes Iijima reluctant to accept Daisuke's confession. However, Daisuke doesn't care about their differences and, despite his shyness, is determined to win Iijima over.

Clan of the Nakagamis: The Devil Cometh

Haruka and Nakagami have been seeing each other for months now, and have decided to take their relationship to the next level. Unfortunately, Nakagami's power-tripping relatives disrupt the peace in their loving relationship. The two know that they can make their future together work, but what will happen to the relationship when a formidable demon appears from the Nakagami clan?

What would a prep school teacher do to encourage a student to study for a college's entrance exam? Well he wooes him of course! The plot may not deliver anything new, but the upbeat teacher and the moody student sure do look cute together.

The difficulties in loving your teacher.

Kishida is in love with her teacher...

Young Master Ruiko, as yet in high school, is being trained to succeed his ailing grandfather as president of the company. Appointed to be his tutor is Naguko Shouichi, a highly valued employee of his grandfather's. Initially pleased with the arrangement, Ruiko comes upon Naguko kissing a man! And yet, whenever Naguko stands close to him, Young Master Ruiko gets strange, warm feelings creeping all through his body.