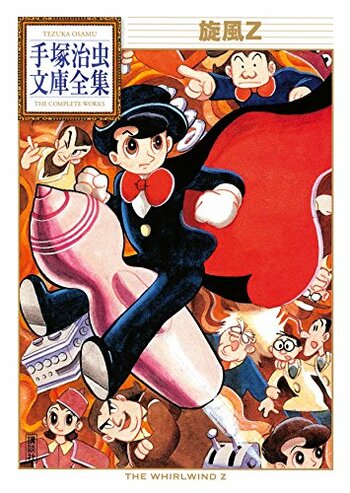 Kenta is a young boy who dreams about being a super hero called Wingman. All his classmates love it when he disturbs the courses to apply his holy judgment, as much as the teacher hates that. One day while coming home he finds a beautifull girl in a bikini. Aoi Yume, she gives him a wonderful item, the book of dream which can make anything written on it true, and so began the life of the real super hero for our dear Hirono.

Thirteen years ago, suddenly the Villainous Army of evil appeared in their gigantic floating castle 10000 meters in the sky to invade Earth! The villainous army have reviving capabilities that make them immortal, making them a serious threat to humanity. To protect us against these invaders, the Divine Dragon Rangers, the Dragon Keepers, wield their miraculous powers and their weapons, Divine Tools, and continuously fight for our safety! The assault of the Villainous Army! The vigilance of the Dragon Keepers! Will they succeed in their conquest…? Find out in the action-packed superhero series of a lifetime!

Murdered by criminals, Detective Yokoda's body is retrieved by Professor Tani and taken to his laboratory. There, Tani performs an experiment that has failed seven times; Yokoda is the latest subject to have his life force transferred into an android body. For the first time, the experiment succeeds. Yokoda is reborn as the armor-skinned android 8 Man, able to dash at impossible speeds, as well as shape-shift into other people. He shifts himself into Yokoda, this time christening himself as "Hachiro Azuma". He keeps this identity a secret, known only to Tani and his police boss Chief Tanaka. Even his girlfriend Sachiko and friend Ichiro do not know he is an android. As 8-Man, Hachiro fights crime (even bringing his murderers to justice).

Poor, short, and unathletic Joey Jones has always been picked on by the rich kids at his school. But when a lightning bolt turns a toy robot he salvaged from the trash into a hulking, remote-controlled bruiser, Joey becomes the only thing standing between humanity and a terrifying race of alien invaders, The Skrugg. If he's going to save the world, however, he's going to need the help of his friends Psy, Lina, and Professor Denton, along with more courage than he ever knew he had.

Batman and the Justice League

A young boy from Japan travels to Gotham City on a mission. A year before, his two parents--both scientists--were presumably killed in an explosion that destroyed an experimental power plant. But the boy believes they may still be alive. At the very least, he's determined to find out what actually happened. But his quest soon leads to a run-in with some powerful forces--forces that require help from both Batman and the Justice League!