Selected to Serve in the Red-Light District - Recommendations 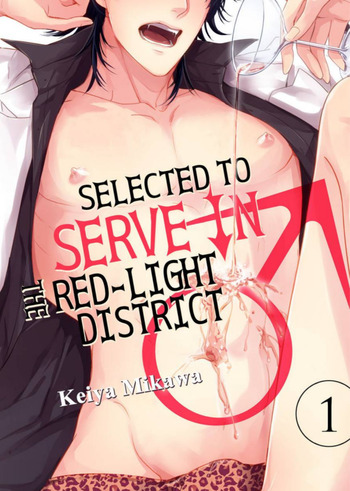 If you're looking for manga similar to Selected to Serve in the Red-Light District, you might like these titles.

A poor college student who is struggling to make ends meet was introduced to a job in the male service industry. How will he react in his new job? Worse, he is to face the beautiful No 1 host!

Keigo the No 1 of "Kissing", targeted physician Nagase to be his appointed customer, who always brings beautiful nurses to visit the club and teases Keigo by saying cute, and have sex with him. Meanwhile, in order to prevent Tomoya, his impertinent junior to snatch his position, he'll do whatever it takes?!!Then Keigo made a bet to have Nagase to Be his appointed customer in a drinking contest, was being approached by Nagase!?

Takechi Shigeto needs medicine for one of his patients, but can’t afford it. A childhood friend sees his problem and pays for it for him. However, the medicine must be paid back at a cost..

The War on Feminization Drugs

"It’s not enough, so… give me more…!" My hole throbs impatiently. I can’t stop myself from crying out when he teases it… I don’t want to be a needy bitch like this…!

I have this older childhood friend, Shuu-chan that I always follow around. One day, I was touched by one of Shuu-chan’s friends, which lead to Shuu-chan laying his claim on me. I would say it was magic, but after seeing me sulk, Shuu-chan and I finally become lovers. After dating for a year, we have never gone past first base. That’s why now I’m doing the seducing, and it seems like Shuu-chan is having a hard time controlling himself!

Ikki, an optimist who isn't afraid of anything, begins working at a small restaurant when he finds himself charmed by the owner. It's there that he runs into Ryuu, and from Ryuu, he hears Toshimitsu's name, one that's oddly familiar. Neither Ikki nor Ryuu can seem to get away from Toshimitsu, and now their mysterious shared past will lead to an unknown future.

The host club's number one, Reiji. Reiji has a certain fetish where he gets excited by watching a man pee. However, he was even sexually unsatisfied after watching his sex friend peeing amazingly. In the meantime, the owner Aya scolded his working attitude and reduced his salary, and his frustrations have reached the limits. As revenge for Aya, as a strategy, he used a big customer to make Aya drunk and make him pee! Is what's supposed to happen but his excitement towards Aya's bashful and indecent appearance of him peeing made him reach his limits!! Meant to harass him, yet unable to stop his sadistic side and his hips?!