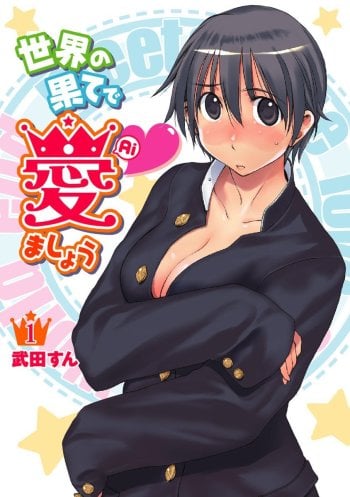 After seeing a picture of Naotora Kusunoki as a kid, the crown prince of the Kingdom of Urunei in Southeast Asia fell in love at first sight. The only problem is that Naotora is the son of a bureaucrat in the Japanese Ministry of Foreign Affairs. Eager to please the prince, Naotora's father forces him to cross-dress and fly to Urunei to get married to the prince as "Nao". Once in Urunei, he unintentionally captures the hearts of the populace who see Nao as the return of Putri Harimau, the Tiger Girl of legend who had a hand in the founding of Urunei with the Dragon Prince long ago. However, there are some in Urunei who are not so happy about Nao's arrival.

Both series are set in a fantasy world, and are about a romance involving the monarchy of that world, with some interesting gender swaps...

Miyoshi is always competing and losing against his childhood friend, Mamiya, who is good at everything. One day, Mamiya collapses from illness and is hospitalized for several weeks. When he returns to school, it turns out he is genetically female, and has decided to try living his life as a girl now much to Miyoshi's horror.

Both series feature a guy turning into a girl against their will, but slowly accepting the change thanks to the guy they fall in love with.

A former boys' school recently integrated into a co-ed high school. Shinya Sanada spent the beginning on his high school life in a hospital, so he arrives to what he thought was the boys-only dormitory a month late. What's waiting for him is his former childhood friend, although he's much more womanly than he remembers. Shinya decides to adapt to his new life at school.

It's a different world where puberty is the result of a butterfly-like metamorphosis rather than simple growing up. Sometimes it goes wrong...

Junior high student Mao Hoshimi is a small and somewhat effeminate but otherwise typical boy. At least he is until he turns into a girl while hitting the baths with his best friend Shunsuke Hidaka! But this is the least of his shocks--Mao learns he is actually of alien descent! Because the numbers of his species are so few, Mao learns, its members have the ability to change shape to breed with other species--and also to transform from male to female and from female to male to suit a potential mate. It seems that, now that Mao is in puberty, he is fated to become a suitable partner for whomsoever he comes in close contact with, be it Tomoko Yokawa, the cute girl he just met, or, to his horror, Shunsuke!

Iori is a timid, feminine boy. Masaru is an aggressive boy who leads the other boys in bullying Iori. One day, they encounter a pair of strange extraterrestrial bunnies who turn them into magical girls in order to fight aliens that are invading their town.

The astronomical event "Apple Moon" occurs once every 300 years. On that day, Sakuma, while visiting the ocean with his classmate to observe the event, ends up meeting a parasitic alien instead...?

The unstoppable force meets the immovable object! The world's brattiest princess is engaged to a prince just as childish. Will they figure out who's the worse brat before one or both are assassinated by political rivals? Read on!