Alt title: The Legendary Weapon Became My Bride When I Overwhelmed the Production Job 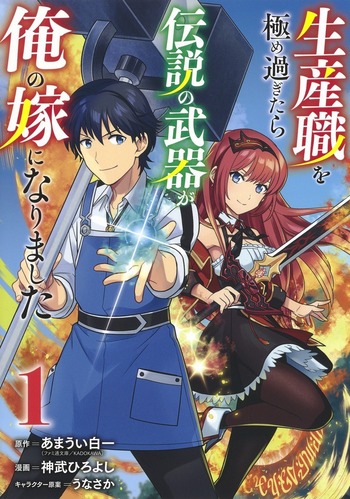 If you're looking for manga similar to Seisan Shoku wo Kiwamesugitara Densetsu no Buki ga Ore no Yome ni Narimashita, you might like these titles.

Kirito and Asuna have been trapped in the death game "Sword Art Online" for less than two months. He had reached the fifth floor of the Archeological Area. In the underground graveyard dungeons and huge mazes, ghosts such as Ghost Undead, which Asuna is not good at, and PK who show suspicious movements are wriggling.

When thirty thousand Japanese gamers are suddenly trapped in the online game world of Elder Tale, a realm of swords and sorcery–that was, up until yesterday, very much a fantasy– is now their cold, hard reality. Severed from their everyday lives, they’re faced with fighting monsters, eating food with no flavor, and being unable to die?! Amid the chaos in Elder Tale Akihabara, veteran gamer Shiroe locates his old friend Naotsugu and teams up with the beautiful female assassin Akatsuki. Together they embark on an adventure to change the world as they know it!

The events of Log Horizon narrated from the point of view of the Crescent Moon Alliance, especially Henrietta and Maryell.

By the time Haruhiro came to, he found himself in a game-like world filled with terrifying monsters. This world is called Grimgar. Armed with no more strength or ability than your average boy, Haruhiro struggles to survive with his fellow party members as they cobble out a mean existence, receiving mediocre pay in return for risking their lives everyday. What kind of future does this harsh, uncaring world have in store for those who are not destined to succeed, who have no prophecy to guide them--who are not heroes...

THE NEW GATE―an online game transformed into a life-and-death struggle for its players. Thanks to the valiant efforts of Shin, the most powerful of them all, an end to the game and freedom for everyone seemed within reach. But just moments after Shin defeats the game’s final boss, he finds himself bathed in an unknown light and transported some 500 years into the future of the in-game world. Thrown from a simple game gone wrong into a strange new land, one young swordsman of unrivalled strength is about to embark on a legendary journey!

In the online RPG world of Elder Tales, the West Wind Brigade is renowned among players for its skills, strength, and...gorgeous members! But when a disastrous expansion Pack traps thousands of players inside the game world, it's up to guild master Soujirou to keep his friends safe-from man and beast alike!!

In an old MMORPG called Live Dungeon. Before the service was terminated, Kyotani Tsutomu made full use of 5 notebook PCs to clear the game and was invited to a different world. And then, Tsutomu was speechless when he saw a live relay of a dungeon capture in the different world. They bulldozed through without any thought of strategy. The misfortune of getting the healer position. Tsutomu reinstated the White Mage that had always been his favorite in games and aimed to conquer the dungeon to find the key to his escape from the different world.