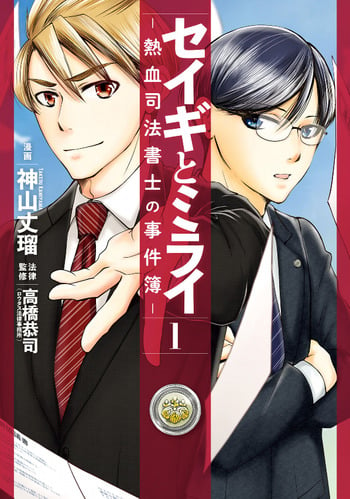 If you're looking for manga similar to Seigi to Mirai: Nekketsu Shihoushoshi no Jikenbou, you might like these titles.

The Manga Guide to Calculus

Noriko is just getting started as a junior reporter for the Asagake Times. She wants to cover the hard-hitting issues, like world affairs and politics, but does she have the smarts for it? Thankfully, her overbearing and math-minded boss, Mr. Seki, is here to teach her how to analyze her stories with a mathematical eye.

The staff of the 'Village D'Etrangers' welcomes a suave new manager, Yutaro Asakura. Yutaro has been blacklisted from working at bigger hotels for mysterious reasons. Yutaro quickly warms to the hard-struggling family that runs the hotel, as well as some of their eccentric long-term tenants. Whether it comes to dealing with unruly guests, helping an alcoholic writer, or finding out why a young girl refuses to speak Japanese, Yutaro and the staff prove capable of weathering all the various trials and tribulations of the hospitality business.

Oomae Haruko is an A+ Temp worker who never cracks a smile or minces words, and leaves work on the dot. But her cynical nature indicates she has something painful to hide. Satonaka Kensuke has just been promoted to head S&F's new Marketing Division. Saddled with a rag-tag group of subordinates, he is struggling to lift his division off the ground. When Oomae is placed in Kensuke's department, she finds herself doing more work than she's ever done before.

After graduation, doctor-in-training Sugisaka Nanako is starting her residency, along with a group of her classmates. They are all in that awkward period where they have their degrees, but they don't yet have enough experience to be really useful around the hospital. Nanako also has to deal with people underestimating her (or even refusing to accept that she is a doctor!), due to her age, gender and physical attractiveness. Nanako and the others observe their assigned mentor doctors, and begin to shed their inexperience by performing tasks under supervision. They will work hard to become the best doctors they can be.

Tamako doesn't have any confidence, sex appeal, or romantic experiences. Caught off-guard while job-hunting, she is hired to work for an office full of suspicious people who specialize in designing for pachinko parlors. Thus, her days of agony begin to unfold.

Features the employees at the Genbu Shobō publishing company. Araki, who is a veteran editor for the dictionary department, is looking for a successor now that he's approaching retirement age. After Majime Mitsuya - a salesman who's a poor talker - meets Masashi Nishioka - Araki's coworker who is sociable and frivolous — Araki overhears their conversation and decides to recruit Majime into the department. "The awkward humans" Majime and Masashi work together to compile a medium-sized Japanese dictionary titled "The Great Passage"

Ever spent hours in bed, unable to sleep? Feel like you always wake up tired, going through life in a daze? Ever wanted to sleep like a cat? With the help of her kitty teachers Kuu and Kai, Hiromi Miyazaki, a former "forever tired" mangaka, is here to give you tips and tricks to help you get a good night's rest. From busting sleep myths to creating healthy sleep routines, diet adjustments to learning how to "switch off", learn the best ways to take control of your sleep and get your waking hours back.