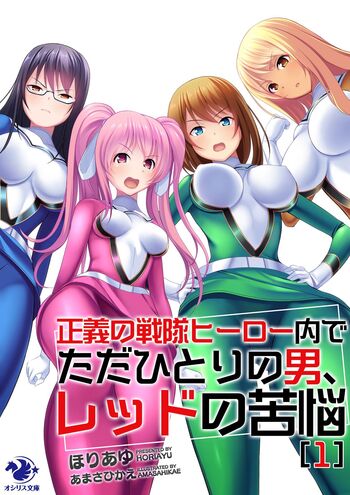 If you're looking for anime similar to Seigi no Sentai Hero Uchi de Tada Hitori no Otoko, Red no Kunou (Light Novel), you might like these titles.

Saekano: How to Raise a Boring Girlfriend: Fan Service of Love and Youth

After six months of hard work, the high school doujin circle Blessing Software has almost completed its first game; but to finish, they need to take a few picturesque background photos. So the gang makes their way to a hot springs inn by the scenic mountain forest, where they can lose themselves between the trees and take advantage of the sultry open-air bath. Tomoya, founding member and the club's only male, is focused on the task at hand; but to get through this trip in one piece, he'll have to survive the advances of the playful Michiru, obsessive Utaha, aloof Megumi, and his childhood friend Eriri!

Kazuto Tokino lives his tranquil life attending high school by day and running the family bath house by night; but his peace is all set to change. One fateful day, the Beautiful Princess Valkyrie crashes her spaceship into Kazuto’s public bath, killing the high-schooler outright! In order to revive him, Valkyrie gives the teen half of her soul, with the unfortunate side-effect of reverting the princess back to a child in both body and mind. Now the young Valkyrie is moving in to the bathhouse and, with her brash sister Hydra and over-protective catgirl maid Sanada following close behind, it seems Kazuto’s peaceful life is long behind him…