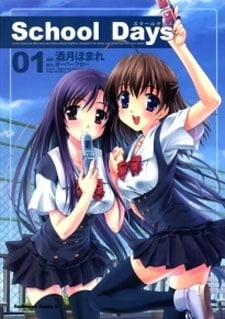 The basis for School Days if you haven't read/seen/played it, it's pretty much about the main leads. Makoto, Kotonoha, and Sekai. Makoto likes Kotonoha. the basis of the manga revolves around them. but, Sekai likes Makoto! the basis is really will Makoto end up with Kotonoha, or Sekai? I'm not going to spoil the ending, but the ending is dark. this is not your everyday shoujo.

i saw the anime first, and the art changes between the anime and the manga. the anime has ecchi-type animation to it. the manga however, the characters don't have this ecchiness to them, and i prefer the art over the anime. it makes the anime look like a harem (BUT IT ISN'T!)

i really enjoyed the manga for School Days. If you haven't seen it and you're into romantic psychological themes, this is totally for you! i would recommend the manga over the anime, but if you don't like reading, the anime is still good.

Story: Itou Makoto, a boy who has a crush on his classmate Kotonoha, enlists the help of his friend Sekai to get the girl of has dreams. But unknown to him, Sekai loves him just a much as he loves Kotonoha. This may seem like some typical love-triangle manga, but theres a reason why its been labelled one of the most violently disturbing and suprising mangas ever.

The whole of the story shows the progressions of a variation of love confessions, as well as how all the characters' feelings for each other develop- mostly love and hatred. The very end of the story, just like in the anime and the games, is where the action starts. All the different franchises of this series all go in the same way, only with slightly different characters taking slightly different roles and having diferent things happening to them.

I have to say however, that the mangas ending is easily the most dissappointing. It was nowhere near as graphically disturbing as the games and anime endings but that doesn't mean it was a total bore. It was still pretty good.

Art: I loved School Days' art, but there was too much pointless ecchi for me, though in saying that, there wasn't that much in comparison with the animes ecchi level.

Characters: All the characters in this you either strongly love or have a burning hatred for. I HATED Itou- his womanising ways weren't as badly reflected upon in the manga, but he still was very annoying. Sekai was a relatable character, but prone to going VERY over-the-top which made her too irritating to possibly like. Kotonoha was slightly more likable, her sweet innocent character became very interesting and Higurashi-like when another facet of her was later revealed.

Overall: If you've watched the other School Days endings etc. then this one will be dissappointing. I suggest reading this, then later watching the game and anime endings to make them seem worse, this is like a softer version of School Days with less sex, ecchi and violence.