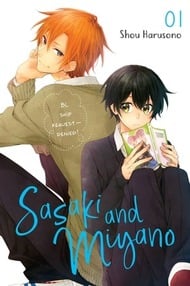 Don't let the # rating rile you, I just don't think I can rate it 10/10 rn since it's still ongoing! (spoiler: I really really enjoy this series tho~!) This manga, is such a joy to read. All the characters, not just the title two, are enjoyable and I'm not sure I've ever wanted to know about every single friend and/or background character before. I'm not gonna say the overall plot is completely original, (Boy A falls for Boy B, unrequited love and pinning, confession followed by confusion, the eventual mutual feelings, etc) but I don't think I can say I've ever read one executed like this. The story of these boys coming together and trying to traverse love is such a fun journey that I think a lot of people can kinda relate to. What I really enjoy about this series is how understanding everybody is and being in a same-sex relationship isn't seen as this horrendous gross concept. Alot of BL I've read always have this plot point of those around them looking at them with disgust or what they're doing is criminal, and while I know that was how a lot of people would react to these kinds of relationships in the past (and sometimes even now), it still doesn't make it any less hard to read sometimes.  The art for this series is very beautiful. I feel I took longer reading this because I kept taking time to go back and analyze the panels and how the characters moved and interacted with each other in visual. There is so much expression in little details that make this just charming to look at. Theres also small changes to show the characters changing and growing as the story progresses that I can't say off the top of my head I've seen much in other manga I've read.  Overall, this series is a breathe of fresh air and its no wonder it got an anime adaption and high popularity. I'm so excited to see where these boy go in their futures and how their love grows.

This is so unbelievably cute and funny. I found myself laughing a lot of times. I laughed a lot at Miyano BL fanboying and other characters BL fanboying/fangirling hahaha (the characters fanboy/fangirl a lot but they never cross the line, sexualizing or fantasizing about people, or forcing people together or wtv. Their fanboying is really soft imo and not really harmful. The people involved don't seem to care that much. I don't agree with shipping real people together in real life but this is not it). Also, I could relate hard with Miyano's enthusiasm about BL manga and finally having someone to share this interest with. His happiness when talking with Sasaki about the thing he loves is endearing. And how he spends so much money on manga and reads it all on a day sksjjsjs The artstyle is so simple yet cute, it fits the mood of the story really well. The story progresses really well too. It's not rushed like some of the same genre use to be. It's actually really slow-burn. I am particularly delighted with how the main couple handles their emotions. They're straightforward about their feelings, don't go beating around the bush and creating misunderstandings that could've easily been avoided with communication. If they like, they say they like. If they're not sure, they say they're not sure. It's rare to see that. Sasaki is really honest with his feelings about Miyano, which I think is great, and Miyano is honest about his /confusing/ feelings too. He takes his time figuring out and understanding how he feels about the other, if it's love or friendship. Also, Sasaki never tries to force his feelings on Miyano, and is overall just happy to be with him in a friends way. Which I think is awesome. He wants more, ofc, but always respects the other and goes at his pace. He doesn't try to rush Miyano into giving him an answer, he doesn't force himself on Miyano, he doesn't cross the line between friendship and love. Plus he is so gentle, caring, respectful, overall great personality, I can't express how lovely he is. Miyano is also a great character, cute but in a different way than Sasaki, with different characteristics. The side characters are all nice too, they had much fun to the story. It can get a bit confusing to know who's who tho. The premise is nothing original, not at all, but the characters, pacing and overall atmosphere make up for it. The slow pace of the story makes it realistic, gives time for the characters to develop and understand their feelings, and as you on the edge of your seat wanting them to get together. This paired with lovable characters makes this a must-read. I'm excited to see how the anime will turn out.

This is the most beautiful thing you'll ever seen in your life <3 <div id="eJOY__extension_root" style="all: unset;"> </div> 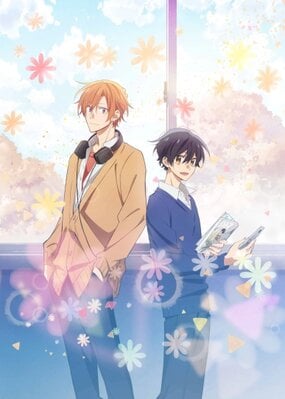