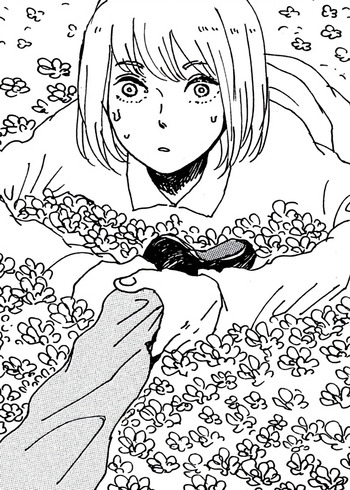 If you're looking for manga similar to Sanzu no Kawa de Waltz wo, you might like these titles.

After the body dies, the soul lives on. Many spirits progress toward the world of light, through the levels of the spirit world where they study how to improve their souls. These spirits are sometimes reincarnated into the physical world, and sometimes they are sent back as guardian spirits for other living people. Guardian spirits must protect their charge's souls from the blackness that oozes up from the world of darkness below. Riyon is a very laid-back spirit, who often skips her spirit classes to fool around. To train her further, she is sent back to the physical world as a guardian spirit. Instead of following a human from birth, she is helping a beleaguered man, the Japanese Prime Minister Kasuga Soichiro, in the last year and a half of his life. After an unexpected close call with death, Kasuga gains some unusual talents, including the ability to see Riyon. Will Riyon and Kasuga together be able to protect his battered soul?

When a person dies, their soul does not enter the land of the dead alone; a Companion must lead them to the gate that leads to the afterlife. Existing in a space between life and death, Aya and other such Companions will help carry those who have passed on to their final destinations, even if they refuse to accept their fates.

“Someday, I wish I could stumble across the memories of certain people that exist in the abyss by gazing at their pain, their sorrow, and the movements of their souls…” Follows ambiguous figures that stride through the snowy lands adjacent to the realm of the dead.

Middle-aged housewife Tatsuko dies after being hit by a runaway taxi, but before moving on she gets to return to life for one week by borrowing the body of Akihiko, a high school girl who survived the same accident.