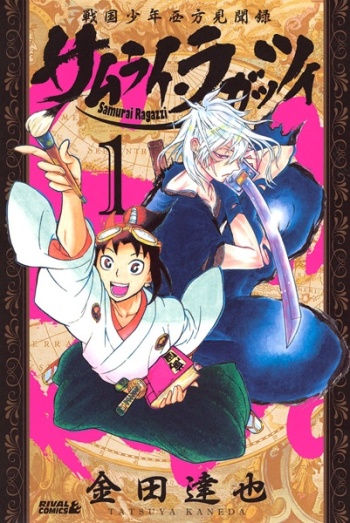 If you're looking for manga similar to Samurai Ragazzi: Sengoku Shounen Seihou Kenbunroku, you might like these titles.

Kibino Makibi is a young Hyoryu Sakka (wandering writer) who seeks to get his Hyoryuroku (wanderer's log) published. Hyoryu Sakka are some kind of explorators going on expedition to unknown places and unknown events in the world, to fill up the black spots of the world. Armed with an umbrella he meets up with Mitsune, the "editor-in-chief" of Sogano Publications.

Dragon Ball: That Time I Got Reincarnated as Yamcha!

A Dragon Ball fan’s greatest dream is getting to live in the Dragon Ball universe and fight alongside Goku and his friends! But one particular fan is in for a rude awakening when he suddenly dies and gets reincarnated as everyone’s favorite punching bag, Yamcha! A Japanese high school student is on his way to a Dragon Ball event and makes a detour to hit on a cute girl. Unfortunately, he meets with an unfortunate and fatal accident before he reaches her and, to his great surprise, wakes up in the Dragon Ball universe as Yamcha! Being a Dragon Ball fan, he knows exactly what misery awaits him as Yamcha, so he takes matters into his own hands and vows to make Yamcha the strongest Dragon Ball character ever!

Shio is forced by the tragedy of the machine war to team up with a mysterious girl from another world whose blood is the color red, just like the prophecies proclaim. Is this girl the human race's last hope for survival in a world overrun by metal?