Saekano: How to Raise a Boring Girlfriend - Girls Side 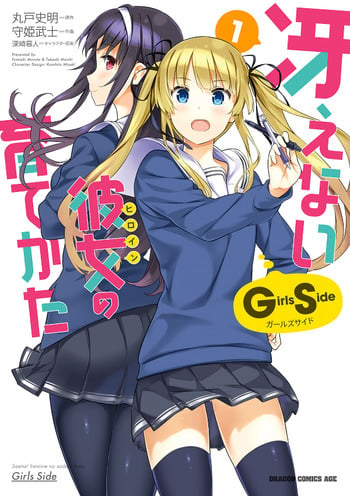 If you're looking for manga similar to Saekano: How to Raise a Boring Girlfriend - Girls Side, you might like these titles.

Yano Shiki, a boy who only shows a facade. Minase Akiha, a quiet and reserved transfer student. Minase Haruka, the other side of Akiha. This is their bizarre love story, one where the distance between them is limitless/zero.

16-year-old Kizuna stalks the city at night, flirting with middle-aged salary men and coercing them out of their money. The thrill should be enough to satiate her, but Kizuna remains unsatisfied with her everyday life… That is, until the beautiful Inoue Yuki, also living in “Birdcage Manor” approaches Kizuna with a job proposition- to model in the nude for Yuki’s cousin, a painter and fellow resident Yusei Asai!

Listen to Me Girls, I'm Your Father! Sorairo no Hibiki

The eldest of the three sisters. Sora takanashi is a 2nd grader in the middle school. She is 14 years old and has a tsundere personality. She normally refers to Yuuta as "older brother (Onii-chan)". She has fairly good grades in school but is not adept at cooking.

Amatsuyu Kirasagi is invited out alone by the cool beauty upperclassman Cosmos and his childhood friend Himawari. Expecting to hear their confessions, he triumphantly goes to meet each of them in turn. But Cosmos and Himawari both instead confess to Amatsuyu that they like his friend. Amatsuyu fights this lonely battle, but there is another girl who is looking at him. She is a gloomy girl with glasses and braids. Amatsuyu finds that he hates her, because she's always turning her sharp tongue only on him and finding enjoyment in his troubles. But it turns out that she's the only one who actually does like him.

Ebihara gets mugged by Tashiro, his junior in college. They somehow end up hanging out together after that, and Ebihara slowly begins to realise that Tashiro may not be as frightening or as weird as he appears at first glance.

Fresh-faced artist, Kojima Yoshimi, used to be the lover of the art gallery’s owner, Shibano. While diverting more of his attention upon his work, another man suddenly steps into the picture, and he apparently cares very deeply for Yoshimi… other than the titled story, “Yogoto no Tsuki,” this book also includes the expressive, heartfelt tales of young players; isolated, top-class businessmen; and the thin and fragile love between males.

I won’t act spoiled with my boyfriend, and I definitely won’t trouble him, either. I’m trying to act like a cool and mature ideal girlfriend, but the truth is, I’m a wholehearted and annoying girl! I can’t tell anyone that I’m stalking my beloved boyfriend!!